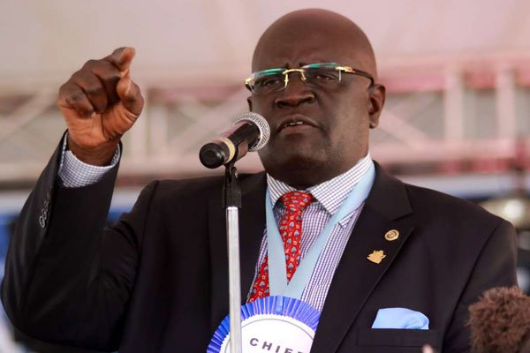 Speculation about Professor George Magoha taking over the delicate information docket has been on for some time.

In fact, it has been a question of when he takes over the education docket, not if.

The Surgeon’s job at the troublesome docket is well cut out. But the burly professor is equal to the task. For Magoha, challenges are never an issue. He dealt with cartels at the University of Nairobi during his stint as the vice Chancellor. He has streamlined the National Examinations Council as its Chairman.

At the Kenya Dentists and Medical Practioners board, Magoha has chastised doctors left, right and centre. He is a fearless professional burly who will square it out man to man with education cartels, KNUT, KUPPET and the toothless parents body.

Magoha actually carried the dimenour of the substantive education. In terms of job passion, he is only second to the increasingly powerful Internal Minister Dr. Fred Matiang’i.

He is a medic with an extensive educational background having started his primary education in Yala and Nairobi before joining Starehe Boys Centre and Strathmore College. He then proceeded to the University of Lagos in Nigeria where he studied Medicine. He is an alumni of University College Hospital in Ibadan, Royal College of Surgeons, Dublin, Ireland and Royal Postgraduate Medical School Hammersmith Hospital, London, Department of Urology, where he earned various academic awards. He also underwent executive management training at the Stanford University, Graduate School of Business.

Magoha was the former Vice Chancellor at the University of Nairobi where he became the first public servant to be competitively appointed, serving for 10 years until 2015.

At UoN, he is credited to have transformed the institution from being rocked by student hooliganism to a leading institution of higher learning in Kenya and internationally.

He is a surgeon, Academic Administrator and Professor of Surgery and a Consultant Urologist at the University of Nairobi’s College of Health Sciences. His inaugural lecture was in October 2003 and had published 59 research papers by the end of 2014. His research on male erectile dysfunction was used during the invention of Viagra and Cialis, both drugs used to treat the condition.

He also launched his memoir ‘Tower of Transformational Leadership ‘in 2017 which underscored the need for people to salvage the society from social ills such as nepotism, tribalism, ethnicity and racism. The book also highlighted his appointments as based on merit.

He has been married to a Nigerian Gynaecologist Dr. Odudu Barbara Magoha since 1982 and they have one son, Dr Michael Magoha, a neurosurgeon, who was born in 1985.