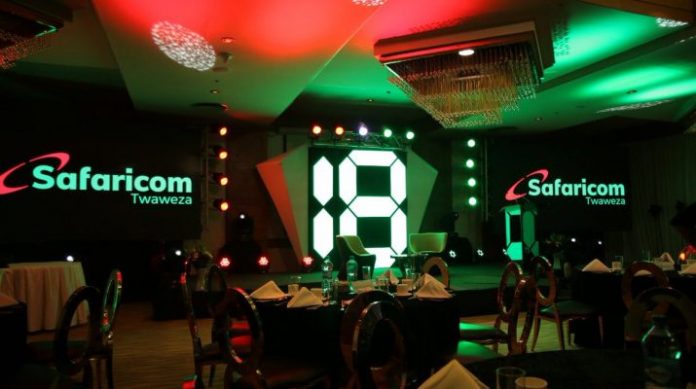 Safaricom has hit the headlines yet again. Bob Collymore led the teleco giant and fellow Safaricom investors to a colourful report announcement, flaunting its massive growth rate and loyal customer base.

Safaricom has recorded massive net profit of 63.4 Billion shillings up
14.7% from its previous 55.29 billion for the year ended March 2018. This according to Safaricom chairman Charles Ng’ang’a is attributed to increase of Safaricom’s inaugural service, MPESA.

Safaricom Mpesa revenue grew by an impressive 19.2% to Ksh 74.99 Billion. The service also recorded 22.6 million customer base while its 30-day active mobile data customers increased to to Ksh 18.8 Million.

Bob Collymore, Safaricom CEO who had skipped last year’s event also called on other key players in the industry to consider fair play in their campaigns and competition. “We have grown past the battles between the banks and telecos…it’s time we talk on collaboration,” Collymore said.

In recent times, Safaricom has embarked on incredible Social responsibility projects dubbed Nawe Kila Wakati (Always with you) and Blaze Network that has heavily put the company on an upward trajectory. The sole responsibility of a company is to make sure that the welfare of their customer base is catered for, and Safaricom through this program has grown to not just a company but a family that connects and uplifts its people.

Also to note from their analysis, Safaricom has been continually consistent on service improvement unlike other networks. Though perceived as expensive by a section of Kenyans, Safaricom has strived to ensure that its service delivery is beyond reproach. With other teleco services lagging behind on service delivery, they have instead resorted to targeted advertisements. This has led to a belief that Safaricom might be superior in some what, which eventually will have a negative impact on its competitors.

Safaricom is a global leader in the job creation and employment field.
It was ranked Africa’s Best Employer, 67th in the World by the Forbes Global 200 list of World’s Best Employers. In March 2018, Safaricom was ranked as the #1 company to work for in the annual BrighterMonday Best 100 Companies to Work for in Kenya according to career professionals and job seekers. A condusive working environment for your employees is key to building a bigger, better business. Also to note, Safaricom offers one of the best working spaces, complete with a relaxing lounge, gym, play area, nursery for babies, green spaces etc. More like stepping into a mini-Google spaces

Safaricom had a very clear long-term mass market strategy as it invested massively in infrastructure with the hope to recoup its investments in future. Safaricom’s growth in infrastructure was also matched with growth in its subscriber base as reported by the Communications Commissions of Kenya. And behold, the fruits are here to be seen by all.