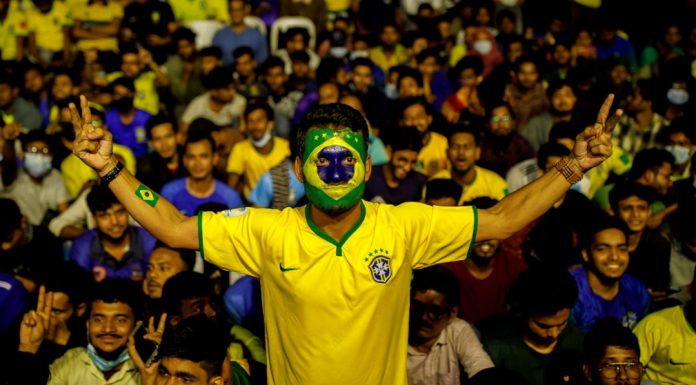 Thousands of Bangladeshi fans of Brazil’s football team cheered and blared vuvuzelas in Dhaka on Tuesday to celebrate the Latin American giant’s victory against South Korea in the World Cup.

Hundreds wore yellow and blue jerseys, the team’s home and away colours, and braved a wintry night to join a massive crowd watching the early morning match on three large screens at Dhaka University in the capital’s centre.

Organisers said about 10 000 people, including many of the city’s three-wheel rickshaw drivers and street hawkers, watched Brazil beat top Asian side South Korea 4-1 in the round of 16.

Mohammad Rubel, a 35-year-old fruit vendor who was selling his wares at a discount, has been a Brazil fan since the 2002 World Cup.

“I’ve been supporting Brazil for my entire adult life. It could be the final World Cup for Neymar. They are playing very well,” he told AFP while peeling a green coconut for a customer.

Monir Hossain, 24, said he walked almost eight kilometres (5 miles) to watch the match with his friends.

“With God’s will, we will reach the final. God willing we will be the champions of (this World Cup). They are playing amazing football,” he said, adding that he came to see Neymar play after the star Brazilian forward was rested over an injury.

The university awoke with thunderous celebrations and vuvuzela horns blared at their peak as Vinicius Junior scored the first goal within seven minutes. Neymar’s penalty at 13 minutes only doubled the joy.

Brazil supporter Disha Moni, a student, said she was excited to see her team win the game.

“The equation is simple; we will take the cup this year. We had a bad reputation of conceding seven goals (against Germany in the 2014 World Cup). I hope we score seven today to wipe our bad name,” she said.

Hundreds of bikers celebrated on the deserted city streets by hoisting Brazil flags after the victory.

Brazil, like Argentina, has a strong fan base in the South Asian nation.

Obsessive support for the team was sparked in the 1980s when Brazilian greats Zico, Socrates and Falcao donned the famous yellow jersey.

The rivalry between the two teams often ends in skirmishes and fights in Bangladesh’s rural towns. Online, fans troll their rival team, taunting them after any poor performances.

Some supporters go as far as painting their homes in the colours of Brazil and Argentine teams and hoisting giant flags on their rooftops.

Ahead of the World Cup, rival fans in rural towns held motorcycle rallies and processions with Brazilian and Argentine flags as large as 3 000 feet (1 000 metres), wearing the jerseys of their favourite teams, with the support most visible every four years during the World Cup.

Brazil will play against Croatia in the first quarterfinal, while Argentina will take on the Netherlands.

If both teams win, organisers in Dhaka are expecting an even bigger gathering in the semifinals.

“We are worried where can we accommodate all the people if that happens! But it will be really fun,” an organiser told AFP.