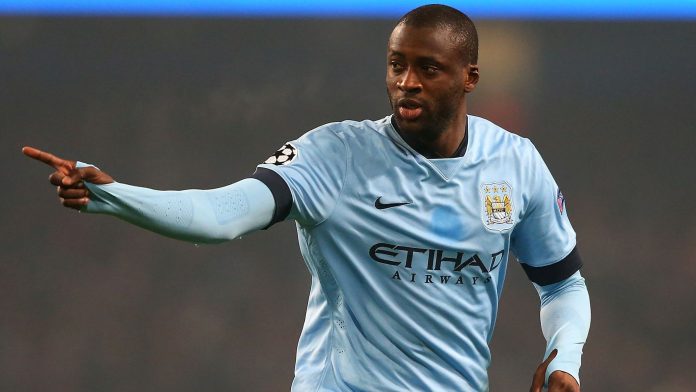 As Pep Guardiola scratched his head, rubbed his beard and gesticulated wildly on the touchline in a bid to stop another post-mortem being commissioned on his European credentials, Yaya Toure was likely left stifling some laughter.

‘He creates a character,’ the former City player told France Football in 2018. ‘When I see him scratching his head to show that he thinks thoroughly, it makes me laugh. It’s comedy.’

The two men have an acrid history, a long-running feud that saw Toure exit Barcelona in 2010 and Manchester City in 2018, both under Guardiola reigns. Each divorce was painful, the fall-outs gallingly public.

And so Toure’s criticism of Guardiola’s Champions League credentials in Manchester in the wake of their last-eight collapse against Lyon comes as little surprise to those that witnessed what transpired between them at the Etihad Stadium.

‘If this was Barcelona or maybe Real Madrid, for sure he’s going to be in trouble,’ Toure following the 3-1 loss to the seventh best team in France. ‘It’s down to the board and what they’re going to decide to do with him.

‘Of course, Pep is good but people are going to demand a bit more from him because of what they give to him. When you get these things, you have to give the trophy.’

The fact he acknowledged Guardiola is ‘good’ shows some growth since he emptied his locker and switched to Olympiacos in Greece.

The last time Lyon got the better of City – back in 2018 – Toure’s agent Dimitry Seluk took aim at Guardiola by uploading a photo of an African shaman poking a voodoo doll with the Catalan, in the mind of the doll, in pain.

Much like Toure, Seluk and Guardiola’s personal issues are nothing new.

Speaking to Sport24 in 2018, the same year Toure left City, Seluk said of Guardiola: ‘You know, Guardiola cannot be called a dog. Because a dog is a good and kind creature, man’s best friend.

‘But Guardiola, by his very nature, is man’s worst enemy.’

Toure’s career is littered with episodes of annoyance and irritation that soon becomes a feud or feuds. There was the infamous birthday cake fiasco under Manuel Pellegrini – unhappy that the club failed to present him with one – but little bothered him as much as that final season under Guardiola.

The Ivorian won three top-flight titles and made more than 300 appearances for City, but once Guardiola rolled into town the bubble burst.

In that same France Football article, Guardiola is labelled ‘cruel’ and his success a ‘myth’ that Toure was ready to expose. Defeat to Lyon in Lisbon only appeared to strengthen the midfielder’s deep-rooted beliefs on the Catalan.

‘I want to be the one who breaks the Guardiola myth a bit,’ Toure said.

‘Barcelona, he did not invent it. He just had the intelligence to adapt what Cruyff had set up. Then, at Bayern and City, he tried to reproduce the same patterns but with this requirement: working with ‘his’ players and with almost unlimited means. It would not work at Crystal Palace or Watford.

‘For me, Zidane is bigger because he has fewer requirements and shows great respect for all his players. Pep, he wants to be considered a genius. He loves it.’

While Toure’s agent only worsened the relationship between player and boss, Toure clearly played no part in Guardiola’s plans as he was forced to wait until the end of the season to get his first league start of 2017-18.

After eight years, Toure knew his time was up.  The issue was, he was not going to go quietly.

In that sitdown with France Football after his contract had expired, Toure dropped a bombshell. He sensationally claimed Guardiola had an agenda against African players and that was behind his omissions from the team.

‘He pretends not to have any (problems with people of colour),’ Toure said. ‘He is too intelligent to be trapped. He will never admit it.

‘But the day he will field a team in which we will find five Africans, not naturalised, I promise I will send him a cake!’

Guardiola wasted no time in issuing his riposte. Toure was old news but some things could not be left without a reply. This was very clearly one of those moments.

‘It’s a lie and he knows it,’ Guardiola said, vehemently denying the stance raised by Toure regarding African players. ‘We were together for two years and now this is when he says it. He never told me face-to-face.’

There are so many more anecdotes involving run-ins and awkward encounters that Toure has since ripped off the bandage of privilege from to divulge to supporters.

He would continually refer to Guardiola ‘spinning around me without saying anything’ and he even went on to accuse his boss of using that final season as ‘revenge’ – a comment denied by the Catalan.

Now long since detached from Guardiola and City, taking Toure’s comments at face value, he more than has a point regarding Guardiola in Europe.

Jupp Heynckes won the treble with Bayern Munich the summer before he took charge and now Hansi Flick stands on the cusp of his own treble in his debut season in Bavaria. The closest Guardiola got was three near semi-final misses.

At City he has spent a fortune, more than £300m alone on defenders and yet they have never made it beyond the last-eight. Monaco, Liverpool, Tottenham and Lyon their conquerers.

Toure will remain one of Guardiola’s fiercest critics based on how their relationship soured in Spain and in England. But with every passing season there is more and more truth to what he exclaimed to France Football in that bombshell interview two years ago.