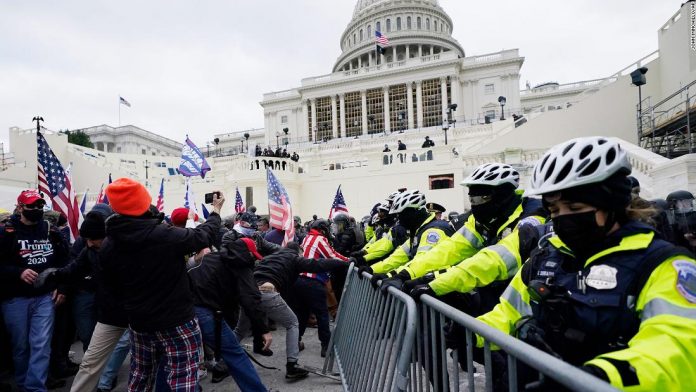 Shortly after 1 p. m. hundreds of pro-Trump protesters pushed through barriers set up along the perimeter of the Capitol, where they tussled with officers in full riot gear, some calling the officers “traitors” for doing their jobs.

Video from inside the Capitol showed Trump supporters marching through Statuary Hall.

The US Capitol Police is asking for additional law enforcement for assistance, including federal authorities, per a source familiar.

The source says there are several suspicious devices outside the Capitol building.

The protesters have breached exterior security barriers, and video footage shows protesters gathering and some clashing with police near the Capitol building.

CNN’s team on the ground saw a number of protestors trying to go up the side of the Capitol building.

Protesters could be seen pushing against metal fences and police using the fences to push protesters back, while other officers reached over the top to club people trying to cross their lines.

Flash bangs could be heard near the steps of the Capitol as smoke filled the air.