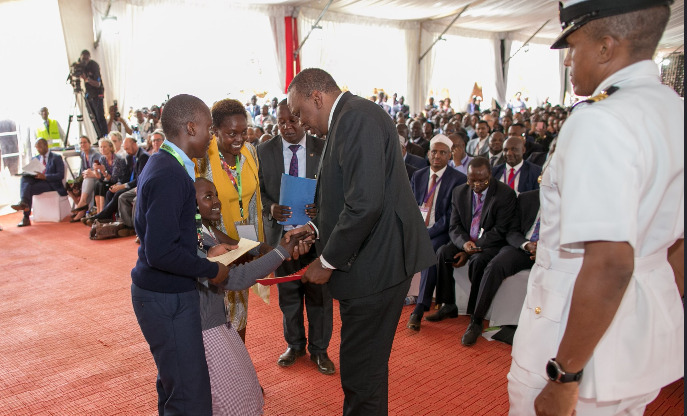 President Uhuru Kenyatta has today called on leaders to stop attacking  State agencies mandated to fight graft.
Affirming his resolve and commitment to the fight against corruption at all levels of Government, President Kenyatta said his administration has put in place a proactive programme of prevention as well as asset recovery that will serve to guard the public purse.

“I expect all of us to desist from creating barriers, hurdles and obstacles in the work of all state agencies involved [in the fight against corruption] and in turn cooperate with them as they discharge their respective mandates,” said the President.

The President who was accompanied by Deputy President William Ruto, spoke when he officially opened the 6th Annual Devolution Conference in Kirinyaga County.

President Kenyatta castigated leaders who have formed a habit of going to funerals and weddings where they spread falsehoods on others as concerns corruption.

He said any person with information as concerns graft is free to visit the Directorate of Criminal Investigations offices and record statements on any corruption allegations.

“I know many Kenyans believe that those mandated to do investigations have the capability to preform their duties,” said the President.

The President challenged anyone with information on his involvement in corrupt deals not to fear but go and submit the same to the DCI offices.

“I saw some saying I have stolen I don’t know what, please if any of you has any information go to DCI offices and report. You don’t have to fear anything. There is no need to move around funerals spreading falsehoods, how will the dead help you?” the President asked.

President Kenyatta assured state agencies involved in the fight against corruption of his full support and called on the judiciary to play its part to ensure that the wheels of justice in the corruption war moves with speed.

He pointed out that corruption is the single biggest obstacle to a better Kenya with shared prosperity for all as it has permeated both the national and county governments.

The President however said his government has taken bold steps to create a stable political environment against which the goodwill and support for good governance can flourish.

“Since the beginning of my Second Term, Kenyans have witnessed a more aggressive and vibrant investigative and prosecutorial approach to slaying the Dragons of Corruption and Impunity,” said the President.

The Head of State made it clear that the war on corruption is not against specific individuals or communities but rather it is a war against a crime that robs Kenyans the opportunity to build a nation with shared prosperity for all.

The President at the same time called on all governors to join him in the war against graft terming it ‘generational struggle’ in which all Kenyans must emphatically say no to, and reign in on the corrupt within their respective governments.

“As we strive to build our nation and fill the national basket with the fruits of our labour, it is unfortunate that some have their hands in that basket taking away from the common good the necessary resources needed to build a better Kenya for all,” said the President.

He said with the renewed zeal against graft, Kenyans are assured of the brightest days ahead.

The President therefore called on all Kenyans to support the war on graft, saying winning the war would ensure better utilization of resources aimed at building a better country for all.

He challenged leaders to raise the bar in delivery of public services and accountability, noting that the foundation has already been set and now every Kenyan expects each county to prosper and improve the standard of living of its residents.

“For so long, Kenyans have been debating devolution, its merits and demerits. From what we have learnt, the time has now come to put this knowledge into acts and deeds that transform the lives of Kenyans,” the President said.

President Kenyatta urged county governments to turn their focus on delivering on the hopes and dreams of Kenyans, through tireless commitment to duty, integrity and servant-leadership.

The Head of State said he will soon convene a leaders forum discuss prudent utilization of public funds saying there is no need for county and national governments to continue spending more funds on recurrent budgets and personal emoluments at the expense of development.

“Yesterday we agreed [Governors] on the need to have a national conference on this issue so as to come up with policy and guidelines to correct these mistakes to ensure money goes to wananchi but not to a few individuals,” said the President.

President Kenyatta expressed satisfaction that devolution is working as demonstrated by various economic activities at the grassroots where value addition to agricultural products is getting entrenched.