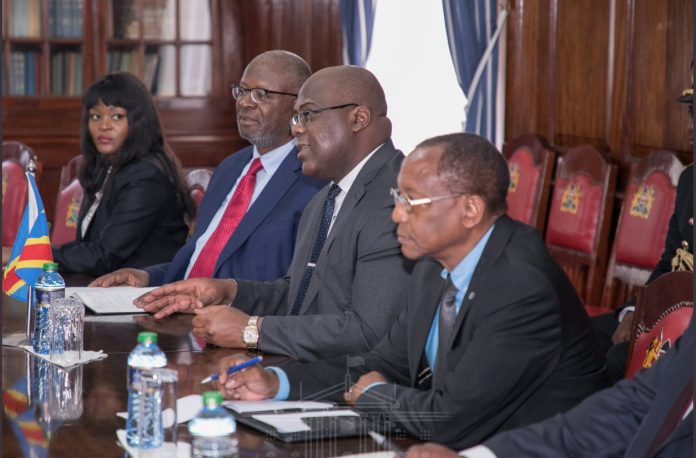 During their talks the two leaders explored ways and means of strengthening bilateral relations between the two countries.

President Kenyatta assured his counterpart of Kenya’s commitment in helping the DRC achieve political stability saying that Kenya has learned valuable lessons from past political tensions, which the country is willing to share with the Great Lakes nation.

“Thank you for coming and we are looking forward to strengthening the partnership between our two countries for the benefit of our citizens,” said President Kenyatta.

“We will continue to help you achieve peace and stability because we have had similar experience which we can share. Our country has been able to calm down political temperatures through the famous Building Bridges Initiative,” he continued.

The President said Kenya has for decades hosted Congolese refugees some of whom have since been adopted as Kenyans adding that the two countries have a lot to share in terms of cultural heritage.

“Many Congolese have lived in Kenya and the country has adopted some of the Congolese music which has now become part of our life,” President Kenyatta told his visiting counterpart.

President Kenyatta said Kenya will partner with Congo in capacity building by offering training opportunities to Congolese public servants in Kenya’s training institutions such as the Kenya School of Government.

He said the training would enable the Congolese policy makers to sharpen their skills thereby formulating good policies to ensure the country achieves its development goals and deliver quality services to its people.

“We are ready to partner in building infrastructure, sharing skills in extractive industry and in many other areas of mutual benefit,” the President said.

On trade, President Kenyatta observed that a lot of Congolese imports pass through the port of Mombasa especially goods destined to Goma and Lubumbashi the eastern part of DRC and called for the deepening of trade ties going forward.

Once again President Kenyatta congratulated the newly elected President for winning the December 30th election saying the peaceful transfer of power in DR Congo is a sign that Africa has now matured and that it can sort out its problems without external influence.

At the meeting also attended by Deputy President William Ruto and several cabinet secretaries, the President lauded the citizens of Congo for their maturity in how they conducted the last election and urged them to unite and develop their country.