Uhuru: I will continue working with Raila on national reconciliation 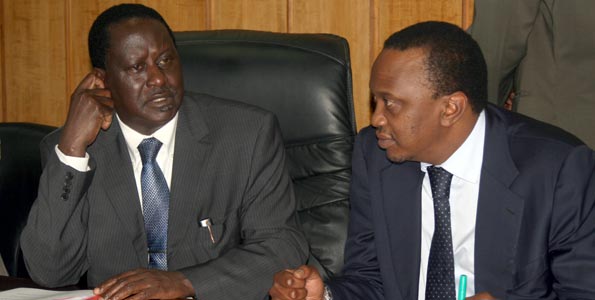 He said there is no greater legacy for him than to leave a peaceful, healed and united nation where all Kenyans feel included in matters of socio-economic development.

“I will continue working with Raila Odinga. We need to be inclusive on how we manage our affairs. We must be inclusive to foster peace, development and prosperity,” said President Kenyatta at Kisii High School where he met leaders from Kisii and Nyamira counties.

“We must move together as a nation where no Kenyan feels being left out,” he added.

President Kenyatta who was accompanied by DP William Ruto and Raila Odinga said only inclusivity that encompasses equality and equitable sharing of resources will take the nation to the next level of development.

He said the Building Bridges Initiative which was crafted after the historic 9th March 2018 handshake with Raila aims at bringing all Kenyans together by working on the inclusivity agenda.

Through the handshake, said the President,“ We agreed to bring Kenyans together by rejecting politics of division.”

At the meeting, Kisii and Nyamira leaders led by Governor James Ongwae engaged the Head of State on various development issues before he proceeded to the upgraded Kisii Teaching and Referral hospital where he unveiled several new facilities.

Despite prodding by local leaders to declare his position on the ongoing debate on a referendum to amend the constitution, President Kenyatta refused to be dragged into the matter saying his agenda for Kenya was development, completing ongoing programs, improving national security and winning the war on corruption.

“I will continue fighting corruption until we win the war. We shall not be moved or shaken by forces against this war,” he said as he commended Chief Justice David Maraga (who was present) for leading a judiciary which has now become bolder in fighting the vice.

The President expressed his appreciation that the judiciary is now showing a strong will to fight graft and the courts are demonstrating a strong commitment to punish those engaging in corruption.

President Kenyatta said resources being lost through corruption can be used to improve the salaries of public servants who he told to be patient in the push for better remuneration until the economy improves and the anti-graft war is won.

“Once we win this war, we can afford higher salaries. When the economy improves, we can talk of better salaries,” he said as he warned that corrupt individuals should stop dragging their communities into their problems once nabbed engaging in corruption deals.

The Deputy President agreed with the President that Kenyans were no longer interested in divisive politics.

“We have agreed we do not need politics of hate, division and fighting among leaders,” DP Ruto said.

Raila Odinga said the Building Bridges Initiative will benefit all Kenyans saying the handshake was on the realization that continued street protests, hatred and divisions between politicians was likely to drag the country into more conflict.

He said the Building Bridges Initiative is informed by a 9-point agenda that includes sustained war against corruption.

At the upgraded Kisii Teaching and Referral Hospital, the President opened a new 250-bed capacity male ward, unveiled a 100-body capacity mortuary with histology and anatomy labs and, a chapel. The previous mortuary could only accommodate 24 bodies.

The President also commissioned a 64 slide computerized Tomograpgy (CT-Scan), launched a 50-unit doctors’ hostel to be used by interns and visiting doctors on exchange programmes.

The Head of State also performed a ground-breaking ceremony for an ultra-modren cancer diagnostic and treatment centre.

He said the Shs 2 billion Kisii cancer centre will be the first such facility among three other centres of excellence that the government plans to put up across the county.

Besides the four ultra-modern cancer centres, the government is also planning to establish chemotherapy centres in various parts of the country to manage the rising cases of cancer.

The President also witnessed the presentation of an accrediation certificate to the hospital, giving it the green light to become a medical training for Kisii University.

The certificate was presented to the Kisii University Vice Chancellor by the Chairman of Kenya Medical Practitioners and Dentists Board, Prof. George Magoha.

The President said the new facilities at the upgraded hospital was a clear testimony of the close working relations between the two levels of government.

Earlier, the President received an 11-point memorandum from Governor Ongwae listing key projects that the local leaders sought the engagement of the President.

Responding to some of the issues at the leaders meeting, President Kenyatta said there are no plans to change the original route of the Standard Gauge Railway (SGR) line from the Narok- Kisii-Kisumu route as feared.

The President also promised that the upgrading of Suneka airstrip will be completed by end of the year as Government explores the possibility of establishing an airport at Nyamaiya.

On coffee debts owed by farmers from Kisii, the President said a waiver will be considered once an audit is complete. The KTDA will also be supported to construct two new tea factories in Nyamira and Kisii.

The Head of State said JICA will construct a factory for value addition on Soapstone, one of the most lucrative resources from Kisii.

The Head of State underscored the need to complete all roads currently under construction before new one’s can be started adding that the government has allocate a Shs 14 billion budget for road projects in Kisii and Nyamira counties.

President Kenyatta said the country needs to rethink its land use and tenure systems adding that continued subdivision of farmlands into small units was making the country food insecure.