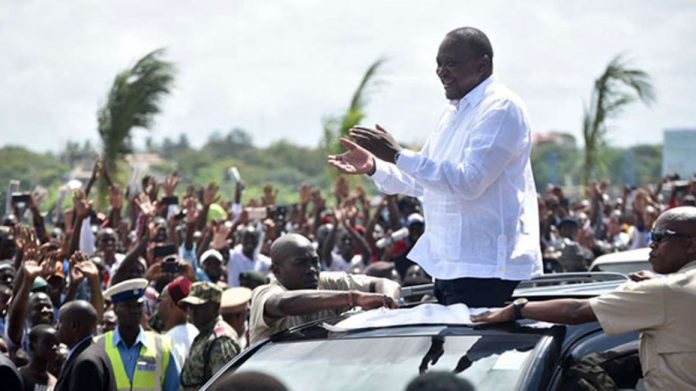 President Uhuru Kenyatta has told off politicians spreading hate to Kenyans saying that they are bound to fail because Kenyans have known their tricks.

Speaking at Jilore trading centre after an inspection tour of the newly tarmacked Malindi-Sala gate highway in Malindi Sub County, Kilifi County, and President Kenyatta said it was disheartening to note that some politicians had formed habit of insulting his administration.

“There are people who day and night criticize my government and moving from area to another politicking at the expense of development. I want to tell such people that Kenyans are alive to the fact that it is only development they are yearning for and not all time politics,” he said.

The President said his silence in politics should not be taken as if he is not aware of what is going on but due to the fact that he decided to continue with his development agenda because that is what he promised the people of Kenya when he was sworn in as the fourth President.

“I will not answer them because I have a duty to work for you people. If I go and start talking politics, I will be welcoming a curse because that is not what Kenyans wanted me to do. I don’t want a curse in my leadership and that is why you will see me more in development oriented tours other than cheap and unwanted politics at this time,” the President said.

The head of state said that more roads in Kilifi will be tarmacked to ease transport and enable many farmers have their products access the market in Malindi, Mombasa and Kilifi with ease.

“We have planned to tamarack the road linking Bamba to Kilifi, the roads connecting Bamba-Ganze-Matanomanne-Bao Lala. Once that is done, then our people will have easy access to different markets and improve on their livelihoods,” said the President.

He also assured the locals that his government was keen on ending the long land issue problem by giving out title deeds.

“We have been issuing title deeds to address the land problem. Many of these documents are on the way and we shall soon dish them to people at the Coast. Our determination is to make sure that the land problem is solved,” he said.