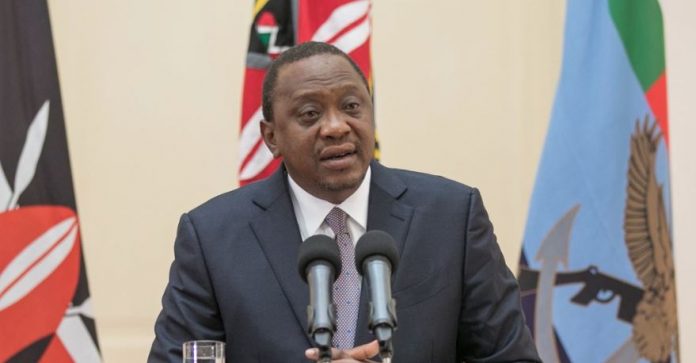 President Uhuru Kenyatta has said the Kenyan government is rolling out the Universal Health Coverage (UHC) program as part of a grand plan to transform Kenya into a newly industrialized middle income country by 2030.The President said access to affordable and quality health services will help end extreme poverty and improve productivity especially in low and middle income countries.

“My Government’s Vision 2030 aims to transform Kenya into a newly industrialized middle-income country providing a high quality of life to all its citizens by 2030.”We believe that improving the health and welfare of citizens lays guarantees for economic growth and competitiveness by ensuring healthy productive populations.”

President Kenyatta spoke at the high-level meeting on Universal Health Coverage (UHC) held on the sidelines of the ongoing United Nations General Assembly (UNGA) in New York, USA said the Kenyan government is rolling a UHC pilot phase targeting 3.2 million people.He said the pilot phase now in its ninth month is focused on strengthening primary health care as well as identifying best practices, lessons and gaps.The President who shared lessons from the pilot with the world leaders attending the forum said political commitment was key to the success of UHC.

“This commitment must embody a shared vision of all political leaders and actors, especially in countries with more than one level of government like Kenya.”Furthermore, the commitment will only be impactful if translated from a shared vision to collaborative action,”  the president said.

He said the largest dividend that can be gained from political commitment is the mobilization of community and citizen ownership of UHC.

“The principle of ‘leave no one behind’, needs to resonate with each and every citizen, thus reinforcing the much needed social accountability for the success of service delivery interventions,” President Kenyatta said.

The Kenyan leader said the harmonization and alignment of all actions and interventions by health sector actors is key to the success of UHC. He said the Kenyan UHC pilot phase has provided encouraging feedback that has reaffirmed his administration’s resolve to make further investments in affordable health care.

“It continues to be work-in-progress. We are inching closer to ‘leave no-one behind’ with special focus on the most vulnerable populations,” the President said.

He said the high-level meeting was an opportunity to renew and galvanize global political commitment while creating more partnerships towards realization of UHC for all.While reiterating Kenya’s support and commitment to the global efforts towards the achievement of UHC and SDGs, the President said his administration is keen on forging partnerships that will assist it to invest more in health especially in primary health care services.

Earlier, President Kenyatta held bilateral talks with the UN Secretary General Antonio Guterres during which the two leaders discussed Kenya’s bid for a non-permanent seat on the UN Security Council for the period 2021 to 2022 as well as the ongoing UN reforms especially Nairobi’s desire to host a UN Global Service Delivery Model Center (GSDM).The President informed the Secretary General of the recent African Union’s endorsement of Kenya as Africa’s candidate for the UNSC seat saying the country is “finalizing on a comprehensive agenda for the security council membership.”He said the agenda will address some of the current global challenges and ensure that Kenya makes considerable contributions to global peace, security and sustainable development.On GSDM, the President welcomed the institutional reforms of the UN saying they are aimed at making the global body more efficient, effective and accountable.He said Kenya welcomes the Secretary General’s proposal of Nairobi as one of the four global GSDM centers.

“I want to thank you for your confidence in Kenya and to assure you that Kenya will continue to give its full support to this initiative and to the overall reform process underway at the Unit.”