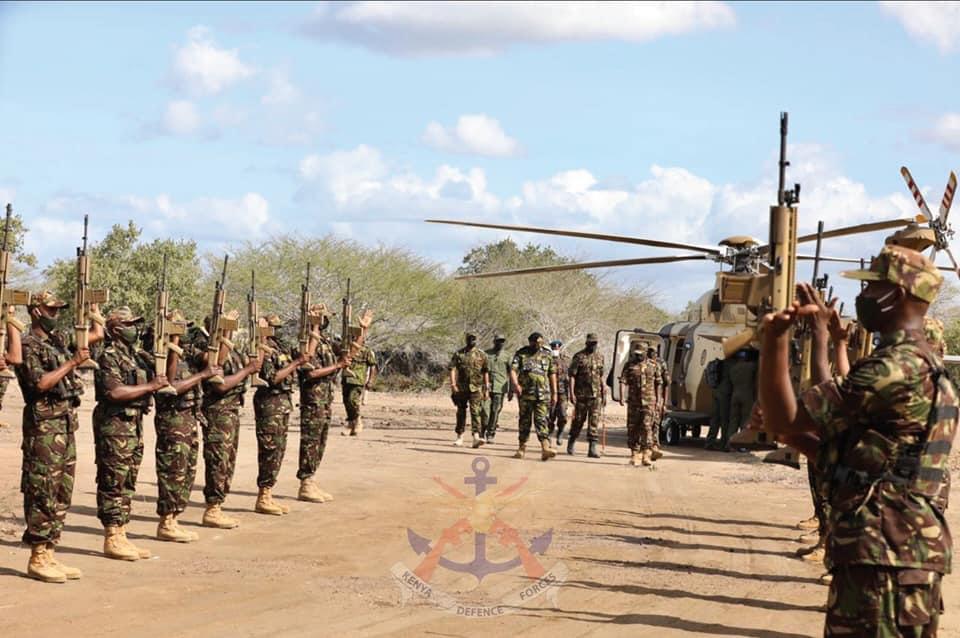 The Field Training Exercise (FTX), is part of a broad Whole-of-Government approach to the delivery of security services by leveraging on interoperability of Kenya’s security assets.

The FTX, which is coordinated by the Kenya Defence Forces (KDF), brings together troops from the different security formations in the country among them the Kenya Police Service (NPS), National Youth Service (NYS), Kenya Wildlife Service (KWS), Kenya Forest Service (KFS) and the Kenya Coast Guard (KCG) with a view of attaining high levels operational efficiency.

At the camp, the President, who was accompanied by Defence CS Dr Monica Juma witnessed drills by officers who’ve been training for three weeks and taken on during a guided tour by Chief of Defence Forces Gen Robert Kibochi.

In his address to the officers, President Kenyatta said he was pleased by the training noting that, the multi-agency approach would help enhance the effectiveness of the country’s security apparatus.

“I am happy that this multi-agency training has taken place. This is a very important message. As the Forces get to know each other and to collaborate in the training,” President Kenyatta said.

He said Kenya will continue to jealously guard its borders and cautioned unnamed external forces against disrespecting the country’s territorial integrity.

“We will not accept anyone claiming ownership of any part of our land. Just as we have respected boundaries of other countries we expect that our borders and land is equally respected,” the President said adding that, Kenya is a peace loving nation.

“As a country we love peace, we are a country that loves to live in peace with its neighbours. Hence why we have been part of various peace support initiatives in other countries”.

The Head of State congratulated the troops for taking up the training, and thanked the officers for the various social initiatives aimed at uplifting the wellbeing of host communities.

“I would also like to thank you all for participating in this training and also for the social responsibility that you have participated in. Restoring hospitals, drilling bore holes, renovating schools and offering medical interventions. These gestures go a long way in changing the mindset and perception of the security agencies among wananchi,” he said.

The President assured the officers of the Government’s support in taking care of their welfare, and urged the multi-agency team led by KDF to keep improving the training so as to make it more effective.

“I would like to urge the authorities involved to increase and keep modifiying competencies to ensure we are mission ready,” the Head of State said.

In his welcoming remarks, Gen Kibochi thanked the President for the Government’s continued support for the multi-agency training saying, the Head of State’s visit will serve to motivate the troops.

“Thank you Your Excellency for the tremendous support you have given to the security teams and you being here at the end of the training signifies that,” Gen Kibochi said.

The CDF said the training which began last year had gone a long way in enhancing operational capacity within the country’s security agencies, and assured the President that the officers adequately trained and equipped to effectively protect Kenya’s territorial integrity.