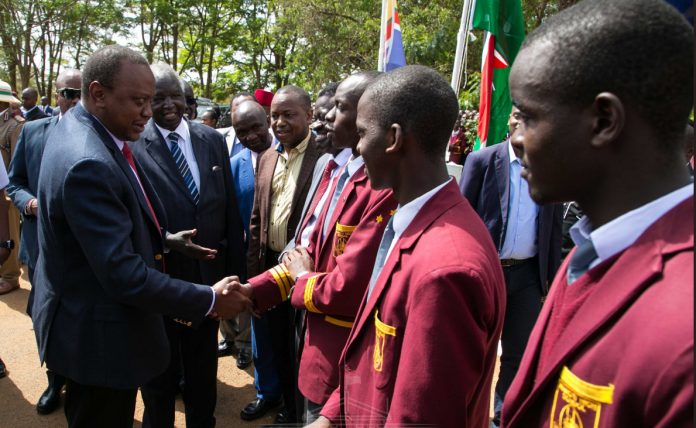 President Uhuru Kenyatta said the government wants all pupils to join secondary school despite challenges associated with the 100 per cent transition.

He said the government will do what it takes to expand physical facilities in existing institutions to ensure all  pupils successfully transit to secondary school.

The President said the government is already taking stock and assessing existing infrastructure  to establish deficits  before undertaking a comprehensive program of expansion and addition of new facilities in schools.

“We want all children in school. We shall built new infrastructure and expand existing ones after taking an assessment,” said the Head of State.

He was speaking at the 94 year old Mang’u High  School in Thika during the institution’s prize giving and thanksgiving ceremony.

Mang’u High school, one of the best performing secondary schools in Kenya, started in Kabaa High School (Machakos) in 1925 before moving to the compound of the current St Francis Girls’ High School (old Mang’u) and finally finding its current home on Exit 16 along the Thika Superhighway.

Some of the school luminaries include top scholars, doctors, engineers and political leaders including retired President Mwai Kibaki and former VP Moody Awori.  Kibaki sent an apology through the former VP during today’s ceremony.

Before the President spoke, the Principal Secretary for Basic Education Dr. Belio Kipsang said the transition rate currently stands at 94 per cent and the number of secondary school students  has shot up to 3 million compared to 1.9 learners in 2013.

The President said the ongoing modernization of the education sector includes the implementation of the Competency Based Curriculum (CBC) which he said grounds the students better academically, morally and socially.

“The Curriculum (CBC) lays emphasis on learners’ ability to process issues as well as their passions and talents. Assessment (under the CBC) will be formative rather than summative  so that the skills acquired match what our industries require,” said the President.

As a policy, President Kenyatta said, the government will continue paying examination fees for all students, enhance capitation for secondary school students and provide medical cover to all students under the National Hospital Insurance Fund (NHIF), a programme that was started last year.

“Our aim and the aim of these efforts is to modernize our education and training so that our sons and daughters can acquire the knowledge and skills that they need to efficiently serve this country and leave it better than they found it,”he said adding  that the government will continue supporting all students in Kenyan secondary schools.

The President said Mang’u High school has so far received Shs15 million in the current financial year to enhance and improve its classrooms, dormitories and ablution capacity.

“To further improve the learning environment for students, the ministry of education will continue to work with the school management to progressively address the infrastructural needs  in the school,” said the Head of State adding that Mang’u will  receive another Shs 140 million in the next two financial years for its infrastructural development needs and expansion program  to cater for its rising student population that now stands at over 1700.

He also promised the school a new 72-seater school bus on the request of the school captain Kitagwa Powell.

The President  advised the students to remain diligent , work hard and devote their lives to the service of the people, community and the country if they hope to match the distinguished careers of the great men who have gone through the school.

He also congratulated the school management under the chairmanship of former Cabinet Minister George Muhoho and the sponsorship of Catholic primate John Cardinal Njue (Diocese of Nairobi) for sustaining the school as a centre of excellence.

Dr Kipsang said the implementation of the CBC is on course and so far the ministry has distributed over 26 million books to ensure its success.

Other speakers included Mr Muhoho who announced his retirement  as chairman of the school board after 23 years, Cardinal Njue who also conducted Eucharistic mass for both the parents , the students and invited guests, Moody Awori and Kiambu Governor Ferdinand Waititu among others.