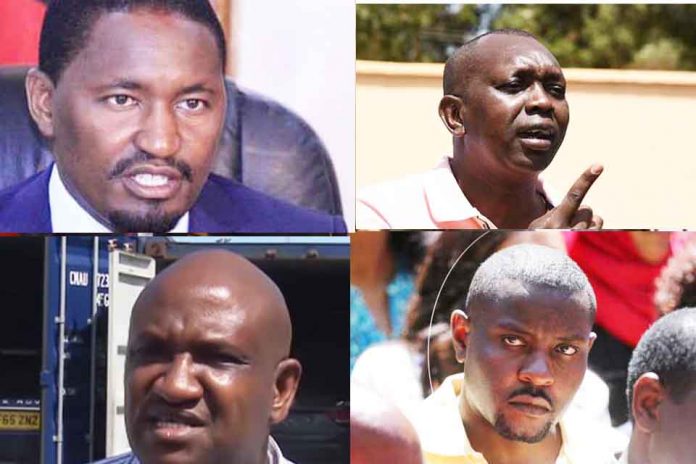 As Kenyans continue waiting for answers on how the substandard maize flour got in the market, documents in possession of Uzalendo News have revealed how a calculated move between the Ministry of Agriculture,Kenya Revenue Authority (KRA) and two prominent businessmen; Hon. Oscar Sudi and Samuel Mburu, are conspiring to have maize with high level of aflatoxin allowed in the country.

A letter by Agriculture Cabinet Secretary Mwangi Kiunjuri dated  30th October,2019 addressed to KRA  requesting for personal intervention from Commissioner general James Mburu to have 270,000 tons of maize from Democratic Republic of Congo(DRC) cleared at the  Malaba border station.

In the letter, CS Kiunjuri states that due to the low harvest there is anticipated shortage between 2019 and 2020, adding that the ministry had organized a few businessmen from Uasin Gishu to handle the imported maize, led by Member of Parliament for Kapseret, and Samuel Mburu.

“I have also authorized a few businessmen from Uasin Gishu to handle the logistics represented by Hon.Oscar Sudi  and Samuel Mburu who is based in Nakuru. A tender for maize supply has been awarded to Landmark Freight Services LTD which is operated by these businessmen.” Kiunjuri said in the letter

The letter further reveals that Sudi and Mburu were awarded the tender through a company called Landmark Freight Services limited which they operate.

Kiunjuri is further requesting for the waiver of import fees and other charges of the maize held at the Malaba port.

On 14th November James Mburu wrote to KRA requesting foer urgent clearance of maize at the port with knowledge that the maize had been cleared unfit for human consumption on 8th November, 2019 with 16.8% level of aflatoxin.

In the letter Mburu insists the maize was inspected for health and safety regulations before loading in DRC.

“The maize is a perishable item and any delays could lead to serious loss to our business and to our investors. Kindly note that the maize was inspected for health and safety regulations before loading in DRC.” Reads the letter

Samuel Mburu later confirms that special waivers from the ministry of agriculture were imposed on the maize which indicates that the waiver of import fees was requested by the CS was indeed granted.

“Additionally we were informed that the cargo had received special waivers of import tax and related charges from the Cabinet Secretary for Agriculture and livestock. We have annexed a letter from CS Kiunjuri for your perusal.” It further states.

However the issue causing mayhem is a farm lease agreement with Hon Oscar Sudi as the tenant which shows that he leased the farm in DRC for a period of six years specifically to plant maize at a cost of Ksh.716, 000,000.

Port clearance documents dated 8th November, 2019 show that the said maize from DRC has been impounded at the Malaba port due to high levels of contamination and an aflatoxin level of 16.8%

It is highly suspected that it is this same maize that the parties are conspiring to be cleared at the port and be brought to NCPB for storage to supplement food shortage in the country.

Also coincidentally, Samuel Mburu, the husband of Nakuru Senator Susan Kihika, and other officials of the Kenya Bureau of Standards, including former Managing Director Charles Ongwae, were accused of colluding with three companies to defraud the government 64 Million shillings.

We reached out to the ministry of agriculture to get their side of the story. An employee at the ministry identified as Boniface Mwangi said the documents are fake even though they are yet to declare it publicly.

If these documents are indeed a reality then this will be a clear example of how fellow countrymen oppress each and slowly killing the country for what may be termed best as selfish gains.