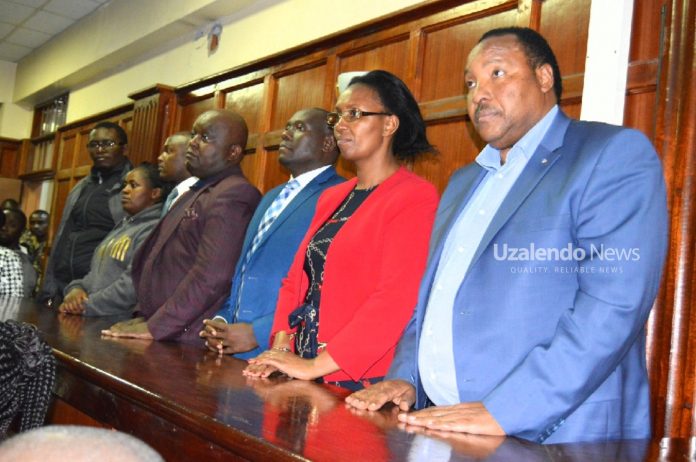 Kiambu Governor Ferdinand Waititu has been ordered to stay away from Kiambu county government offices will mel the is case determined.Waititu and his wife Susan Wangari have been released on a cash bail of Ksh.15m and Sh.4m respectively.

The offices of Kiambu county government have been termed as crime scene and therefore the Governor and his co accused have been ordered to stay away from the offices until the case is concluded.

Chief Magistrate Lawrence Mugambi has ruled that the accused persons deposit their travel documents in court and not to interfere with witnesses or any evidence in the matter.

Waititu and his wife have been charged in court over alleged embezzlement of money from Kiambu County Government.
The Governor face conflict of interest charges for allegedly receiving Ksh.25,624,500 from Testimony Enterprises Limited a company that was awarded contracts by Kiambu county Government.
Waititu is also accused that being the director of Saika Two Estate Developers Ltd he received Ksh.18,410,500 from Testimony Enterprises Limited.

According to the charge sheet Waititu received the money having reasons to believe the amount was acquired from Kiambu county government through corrupt conduct.
The Governor and his wife are jointly charged with dealing with suspect property. They accused that being proprietors of Bienvenue Delta Hotel they jointly received Ksh. 7,214,000 from Testimony Enterprises Limited through corrupt conduct.

They all denied the charges against them before court.
The case will be mentioned on 26th August for Pretrial.