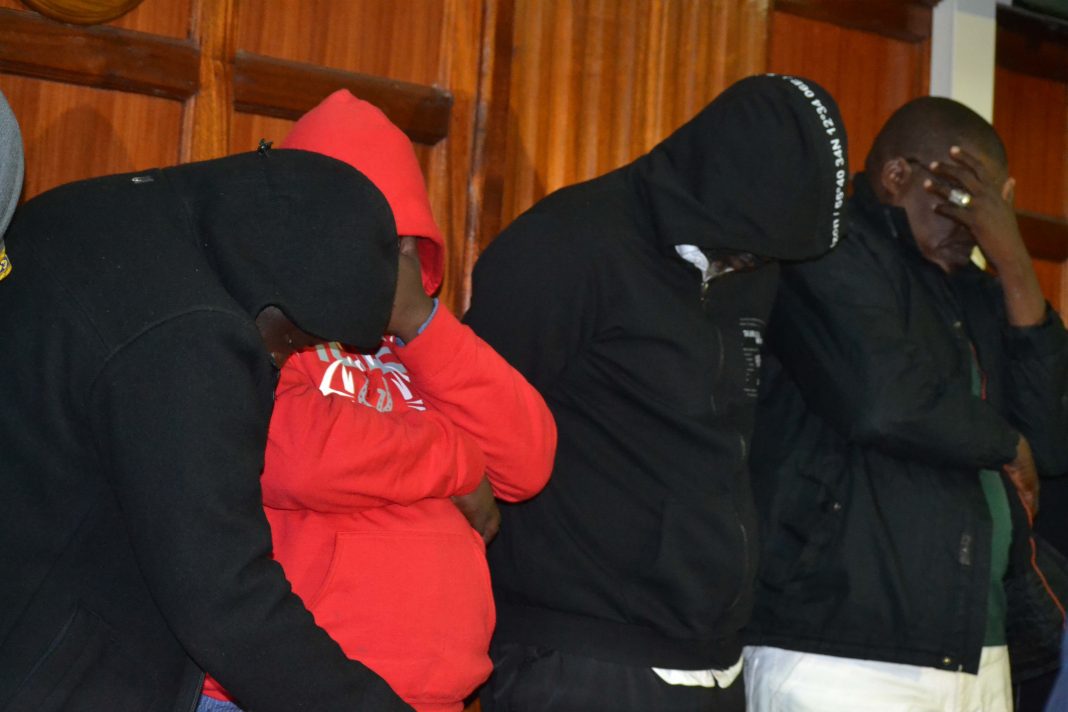 Court has allowed the DCI to continue holding 15 people arrested with suspected fake gold for 7 days  as opposed to the 14 days requested by DCI.
The suspects were presented before Senior Resident Magistrate, Paul Mayova at the Milimani Law Courts where the DCI sought orders to detain them for 14 days to complete investigations.

In the affidavit, the investigators want time to have the metal bars recovered in the suspects’ office examined by a geologist to establish whether they are genuine.
The police also want time to retrieve and analyse data from their mobile phones, laptops and computers.
The court heard that the suspects were arrested on 13th May at house No. 12 at Kaputei Gardens within Kileleshwa, Nairobi, following a tip from members of the accused person.

Upon search, police recovered 23 different mobile phones, 28 steel metal boxes ten of them packed and sealed, several sledge hammer heads, seven desk top computers, two laptops and gold coated iron bars.
Further, it is alleged that the 1,2,3 suspects are foreigners and did not produce any identification therefore need time to verify from the immigration department whether they are in Kenya legally.
According to the investigators, the fifteen could not explain what they were doing at the said office upon interrogation.

Eight motor vehicles were also recovered from the compound among them Subaru KCQ 830W, Land Cruiser Prado KCS 888D, Mercedes Benz KBV 916Q, Toyota Axio KCM 808U, Mercedes Benz KCR 648V, Toyota Corolla KCS 904Q, Toyota Crown KCD 680M and Honda KCM 770B whose registration is yet to be established at NTSA.
The police also claim intelligent reports indicate that the suspects are engaging in cyber related crimes within and outside the country putting the country at risk.

However, their lawyers among them Makori, Ayuo, Omingo, Kinuthia and Kangahi objected the days sought saying that they were unnecessary.
Makori told the court that his clients who are foreigners have their passports and are ready to avail them.He further submitted that the said vehicles were recovered from a car wash and could have been there to be cleaned. It was his submission that the police can still get the information on the vehicles from NTSA without detaining them.

Ayuo submitted that there no reason to detain the suspects for 14 days urging the court to detain them for two days if it deems it necessary to detain them.
Omingo further stated that there was nothing complex in the affidavit to warrant custodial orders.
He said that his clients 8-10 suspects are just collateral damage as they were bystander minding their own business when they were arrested. He requested the court to grant them cash bail.
Kangahi and Ms Kinuthia who represent the 11-15 suspects told the court that their clients are cooks, receptionists and cleaners.
The court has ruled that the suspects be detained at Kilimani Police Station for the 7 days.
The matter will be mentioned on 21st May, 2019.