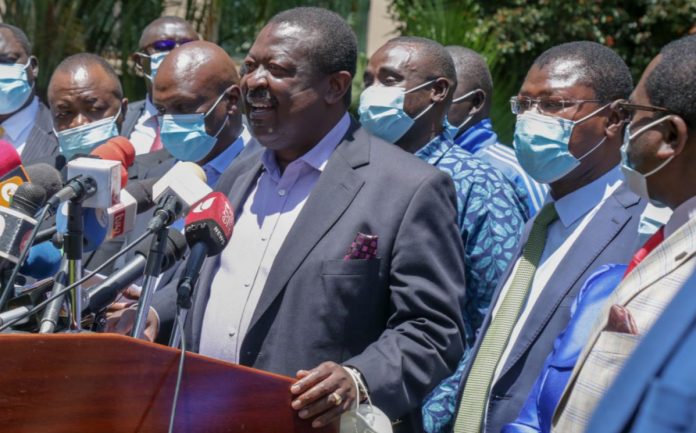 The One Kenya Alliance, which comprises of fairly weak political forces in the country have been in and out of meetings to deliberate on the way forward for their alliance.

The group was founded on the basis of uniting the country, but before their campaign begun, a partial lockdown and ban on political activities was effected.

Each of the candidates has openly expressed their interest in inheriting the seat from Uhuru Kenyatta come 2022.

Musalia Mudavadi, whose campaign begun immediately after the handshake, has oftenly faulted ODM party for not upholding the NASA coalition agreement.

However, his candidature is plagued by weak national support, and a divided backyard.

Same goes to Kalonzo Musyoka, whom despite regular pressers at the Wiper offices, has very little to show in terms of nationwide politics.

Despite this, Kalonzo Musyoka hopes to salvage votes left behind by Ruto, who’s Jubilee influence has been scattered, according to his own admission.

The party managed to sweep clean in the Machakos senatorial vote, where a Wiper candidate secured the seat, thwarting Ruto’s insurgency.

As for Moses Wetangula, his ideologies make anyone want to vote for him as president. But political developments within his party, has made him unpopular and less of a leader.

For Doktari Gideon, who’s Baringo county was the first to reject the Building Bridges Initiative (BBI) has been largely seen as a beneficiary of his father’s political era.

His is seen as a political favor to the late former President Daniel Moi who ruled for 24 years.

In conclusion, the coalition may not have enough to challenge Deputy President William Ruto and ODM’s choice at the poll, largely speculated to be Raila Odinga.

The duo command massive respect in political circles, and the public.

Should there be a coalition, as rumored by their team members Kenya’s fate at the poll will have been sealed.