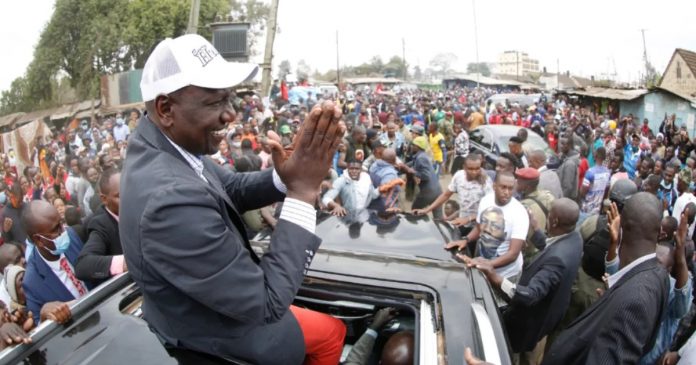 The former prime minister maintained that his handshake with the president was meant for development and not power sharing.

“We agreed to coalesce to fast track development and later politics. My meetings with the President are about the economic transformation of Kenya, which supersedes any other agenda,” Odinga said.

He dismissed the hustler narrative and instead he hit out at the Deputy President William Ruto, challanging him to declare the plans he has for the country should he be elected president.

“For us and the President this is our aim; how to make sure that we have laws that promote equality and uphold national unity,”

“But I want to assure Kenyans that the BBI wave will lead this country on the path to economic resilience and fix the ravages caused by coronavirus. BBI will catapult Kenyans to the Biblical land of milk and Honey- Canaan,”

Raila dismissed DP Ruto’s ‘hustlers vs Dynasties’ campaigns, insinuating that everybody in this country is a hustler.

However in Nairobi, Deputy president the self-declared president of the ‘hustler nation’ welcomed remarks made by Odinga.

Preaching the hustler gospel after church service in Gikomba market Nairobi, Ruto challenged the BBI charade that they should ensure job creation and improvement of the business environment to cushion the majority of ‘hustling’ Kenyans.

“Because we have all agreed that Kenya is a hustler nation, our priority should be to ensure all hustlers have food on their table, they are given business opportunities and we create jobs to ensure they are gainfully engaged because Kenya belongs to all of us,” the Deputy President said.

“They should know that before we talk about how to create positions and share power, we have to discuss the issues affecting mwananchi. The issue of who takes what position should come later,” Ruto said.

“I want to tell them that all of us are Kenyans and even those who push carts deserve respect for the job that they do. There is no Kenya for the well-connected and another for the hustlers,” he said.

“Going forward, we will not allow discussions on power sharing when hustlers cannot put food on the table,” the Deputy President said.