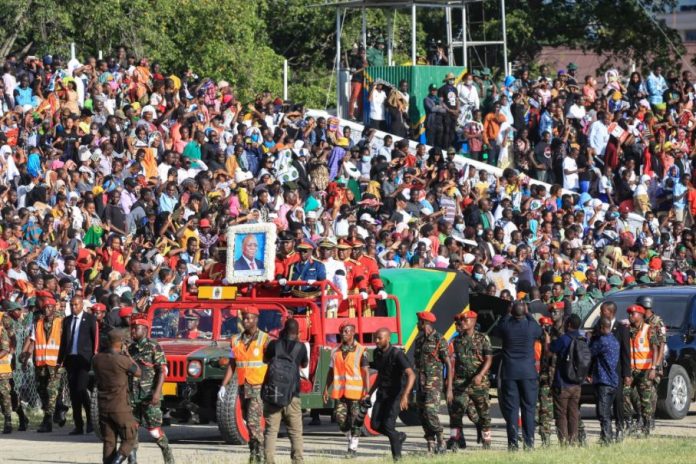 Tanzanian authorities have confirmed the death of 45 people who were crushed in a stampede at Uhuru Stadium in Dar-Es Salaam. – By Gerald Gekara.

According to local sources which reported on the stampede on March 21, a total of 32 women, 7 Children, and 6 adult men died in the stampede.

Among the dead, is one family of Mr David Mtuwa in Dar-es-Salaam who lost five family members who died during the stampede at Uhuru Stadium on Sunday, March 21.

Police Commander Lazaro Mambosasa said the incident was out of Tanzanians opting for illegal entry points to access the stadium.

“They went to the stadium in order to express their love for their departed leader but because the num- ber of people was huge, some became impatient and opt-ed to using unofficial entry points and that was how the problem occurred,” Dar es Salaam Special Police Zone commander, Mr Lazaro Mambosasa, told a local news paper, Mwananchi.

The police also confirmed that 37 people who were injured in the stampede.

Dr Magufuli was pronounced dead at the Mzena Memorial Hospital in Dar-es-Salaam on March 17. The late ruler, who was Tanzania’s first president to die in office, was laid to rest at his Chato hometown on Friday, March 26.