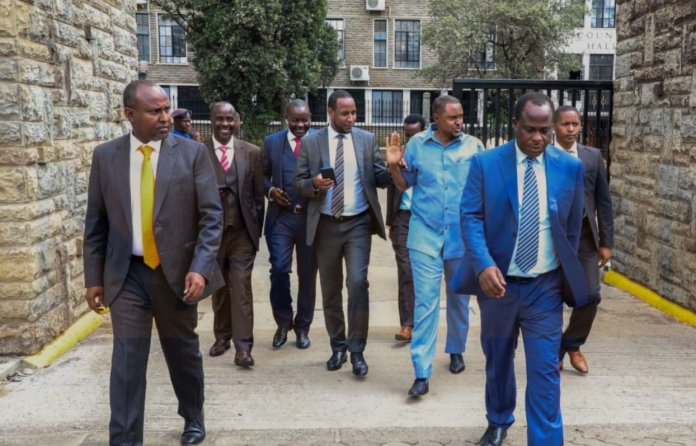 Azimio la Umoja One Kenya Coalition MPs and lawyers for four IEBC commissioners stormed out of the first hearing on petitions to remove the latter from office.

After a brief boardroom meeting to determine whether JLAC had jurisdiction to hear the petitions, the two parties left the hearing.

He was joined by MPs TJ Kajwang, Stephen Mogaka and Aden Daudi.

JLAC voted unanimously that it has the authority to hear petitions seeking the removal of four IEBC commissioners.

“We have agreed not unanimously but through a majority that this committee is the most appropriate to hear the matter. We have relied on Article 251 of the Constitution and our own Standing Orders from 220, 223, and 230 which deal with how petitions are presented to the House and how they are processed,” said Gitonga.

“Petitions by the public are sent to the Clerk who when satisfied that it discloses a ground forwards to the Speaker they are then tabled in the House and allocated to the relevant committee. This is exactly what the petitioners did here,” he said.

Minority Leader Junet Mohamed said the decision was hurried and disowned it. He said, “We have not gotten enough time to discuss and digest the decision. A hurried decision was made and there was no proper voting.”

Lawyers for IEBC deputy chairperson Juliana Cherera and commissioners Francis Mathenge, Irene Masit, and Justus Nyang’aya argue that Parliament should not have been the first point of call in the removal process.

Advocate Jotham Arwa claims that the JLAC lacks jurisdiction to hear the petitions and that the matter should have been referred to the IEBC and the Public Service Commission as required by Section 234 of the Constitution (2b).

“Mr Chairman it is a requirement of your own Standing Orders number 22 and 23 (f) that before petitions can be received they must indicate that they had referred the matter in question to the relevant body. Parliament should not be the first point of call,” said Arwa.

The four commissioners through the lawyers withdrew from the proceedings maintaining the committee has no jurisdiction.

“We believe that the committee has no jurisdiction and we feel that if the committee insists on going on, we will not be party to the process,” said Arwa.