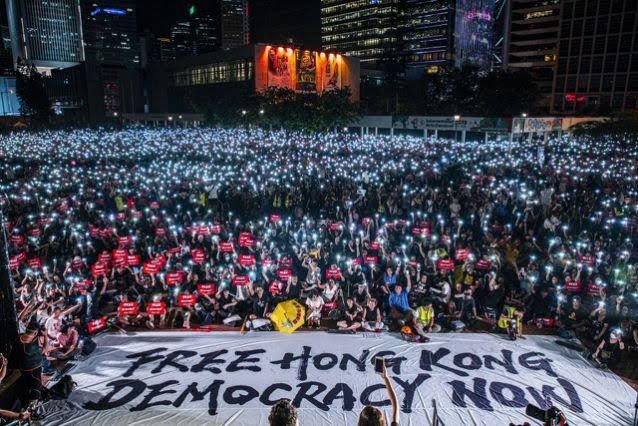 Since the start of mass demonstrations in Hong Kong in early June, there has been a significant escalation of Beijing’s rhetoric and tactics. Instead of addressing the root causes of the public anger, Beijing has demonised the protesters and threatened to suppress them with its military.

Beijing’s shrill rhetoric, misinformation campaigns, and blatant threats have galvanised resistance in what has fast become a volatile situation. The crisis doesn’t appear to be dissipating. And things are going to come to a head very soon.

The mass protests started in response to a controversial extradition bill that was widely seen as another step in the erosion of Hong Kong’s autonomy. The demonstrations quickly escalated due to public anger over police violence and an unresponsive Hong Kong government.

But deeper down at the heart of this crisis is a conflict over the longer-term vision for the city – over its soul.

Read more: The Hong Kong protesters have turned militant and more strategic – and this unnerves Beijing

Beijing’s goal is to gradually tighten its grip on Hong Kong. It aims to assimilate the city into China’s authoritarian political system, and rule over its people in the same way it does in rest of the country. Many Hong Kongers, meanwhile, are desperate to resist any further encroachment by Beijing on their freedoms and way of life. These goals are fundamentally incompatible.

In many ways, this is a problem of Beijing’s own making. It created the conditions for the current crisis by systematically undermining the “one country, two systems” framework.

Beijing has effectively torn up its promises, made before the British handover, to keep Hong Kong’s political system intact until 2047. In recent years, it has undermined the “one country, two systems” framework through political interference, the changing of electoral and other laws, and the penetration of Hong Kong’s social institutions.

In doing so, it has provoked local resentment, a stronger Hong Kong identity, and a culture of resistance. According to a recent poll, the percentage of Hong Kongers identifying as Chinese is now at its lowest point since the handover in 1997.

For the ruling Chinese Communist Party, this is worrisome. And the longer the protests continue, the more it sees its authority challenged. Such resistance, in Beijing’s view, cannot be tolerated.

In the early days of the protests, Beijing adopted a low-profile approach that focused on censoring news of the demonstrations from filtering into mainland China. This approach, however, changed quickly when the Chinese government realised the protests would likely continue and it needed to mobilise public opinion.

What is Beijing’s aim now? In the short-term, it wants to end the unrest by shutting down the protests completely. It has repeatedly signalled its willingness to use force if necessary.

Read more: Hong Kong fears losing its rule of law; the rest of the world should worry too

Beyond that, given what has transpired over the last ten weeks of demonstrations, Beijing will seek to tighten its political control over Hong Kong even further to check continued resistance.

In order to achieve its immediate and long-term goals in Hong Kong, Beijing has put in place a multi-pronged strategy. A full picture of this strategy has emerged in recent weeks:

1) First, Beijing is firmly backing the embattled Hong Kong authorities. Chinese officials have repeatedly urged the Hong Kong police to adopt tougher tactics against protesters who they see as criminals.

And in the last week, we have seen an alarming escalation in police violence, with tear gas and rubber bullets being used with increasing frequency.

2) Beijing is also ramping up its influence operations in Hong Kong to solidify support among pro-establishment elites, businesses, and other “patriotic forces”.

Last week, the State Council’s Hong Kong and Macau Affairs Office and Beijing’s liaison office in Hong Kong held a consultation forum with about 500 pro-establishment figures in Shenzhen, just across the border.

The key message was that the Chinese government was fully behind them and that their fate was tied to Beijing. This has had an immediate impact on the ground in Hong Kong, with the city’s billionaires “breaking their silence” this week and calling for the protesters to stand down.

Not with a small degree of irony, Beijing and its proxies in Hong Kong have a close relationship with the city’s organised crime groups. On several occasions in the last two months, these groups have assaulted protesters on Beijing’s behalf in an attempt to instill fear in the local population.

3) Beijing has stepped up its propaganda and misinformation efforts against the protesters in an attempt to cast them as villains in the unfolding drama. Criminal elements are also working with nefarious foreign agents to foment turmoil and undermine China, the official line goes.

Within mainland China, such blatant twists of truth are widely believed. And because Beijing has successfully mobilised public opinion there, that makes it harder for the government to back down and make compromises (not that we are seeing signs of that).

In any case, Beijing’s relentless war for hearts and minds continues.

4) Beijing is using punitive measures to cut off support for the protesters. For instance, the Chinese government ordered the Hong Kong-based airline Cathay Pacific to block staffers who took part in the protests from working on flights to the mainland.

It did this to deliver an unequivocal message: support the protesters and we will hit your bottom line. Beijing will likely continue to target Hong Kong and international companies that it sees as being on the wrong side of the political crisis.

5) Beijing is trying to deter escalating protests by signalling its strong determination to intervene with force if necessary.

The Chinese government has repeatedly threatened the use of armed forces as a backstop measure if the unrest spins out of control. Indeed, it may at some point make the judgement the situation warrants military intervention, regardless of the high cost involved.

Beijing’s posturing is intended to send a deterrent message and is part of a wider psychological campaign against the protesters. But we are not at the point of imminent military intervention yet.

6) Despite the unrest, Beijing will likely accelerate its efforts to integrate Hong Kong into the mainland economically and through infrastructure projects. High-speed trains, new bridges, and economic cooperation are all part of this long-term effort. We are also likely to see a further tightening of control over the city’s political institutions, judicial system, and media.

For Chinese leaders, the protest movement has reinforced an important lesson: insufficient government power, civil liberties, and perceived weakness leads to the loss of control, resistance, and social instability.

This will only serve to strengthen Beijing’s resolve to assert its control over Hong Kong more forcefully, which will, in turn, provoke further resentment and resistance from locals.

To be sure, Beijing has a long-term Hong Kong challenge on its hands. If it wants to resolve the current impasse, hardline tactics are not sufficient. As unpalatable as it is to both sides, Beijing and the protesters must compromise. But there is little prospect of that in the current environment of escalating violence, inflamed passions, frayed nerves, and hardening attitudes on both sides.

But Beijing must recognise that its actions are sowing the seeds of future conflict, just as its past broken promises led directly to what we are witnessing today. As Hong Kong gallops towards tragedy, it is both mesmerising and heartbreaking to watch.

All Eyes On ICJ Ahead Of Kenya V Somalia Case Ruling