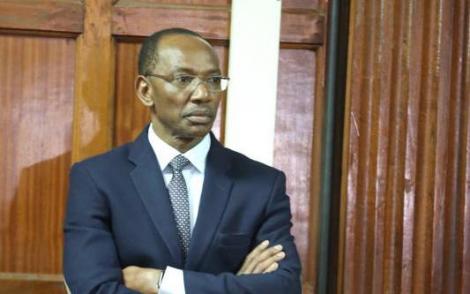 BY PRUDENCE WANZA – Business tycoon Humphrey Kariuki has finally presented himself in court this morning after many days of playing hide and seek with the DCI.

The business man who has dual citizenship, Kenyan and Cyprus appeared in court this morning to answer to 21 charges of Sh.41billion tax evasion.
Kariuki is accused of deliberately failing to pay taxes of Ksh.17,782,553,085 playable to the commissioner Domestic taxes by due dates as required by the law.
He is also accused of omitting from the return of income of Africa Spirits limited an amount of Ksh.2,022,340,210 payable to the commissioner Domestic taxes thereby affecting tax liability.
In total Kariuki faces 21 counts on counts related to tax evasion, fraud, being in possession of uncustomized goods and aiding the commission of a tax offence.
He denied the charges before chief Magistrate Francis Andayi at the Milimani Law Courts.
Kariuki’s lawyer Kioko Kilukumi submitted that the accused person be released on reasonable bail terms as it is his constitutional right and there were no compelling reasons from the prosecution to denied him bail.
Kilukumi added that his client learnt from the media that summons had been issued and as a result he travelled back to the country to take plea.
Be released on reasonable bail.he learned from media that summons had been issued, he flew to the country last night to mad has presented himself in court to take plea.
The prosecution prayed for one day for Kariuki provides his passports to verify whether there are any exit or entry stamps to ensure he is not a flight risk and will not abscond court if released on bail.
However Kilukumi termed the submission by prosecution as malice and abuse of prosecutorial powers. “All that can be done in hours without taking away the liberty of the accused person,” he said.
In his ruling Chief Magistrate Francis andayi stated that Prosecution has no placed any evidence or documents to show they needed more time to verify the passport.”it will be discriminatory to treat the 1st accused person differently therefore the court finds no good reason to detain the accused person, “said Andayi.
Kariuki was however ordered to appear before DCI within six hours after his release for processing.
He has been released on bond of Sh. 22m or a cashbail of Sh. 11m
The case will be mentioned on 5th September, 2019 for pretrial.

Bomb Threat Turns Out To Be A Fence Post

Ukrainian president says up to 3,000 troops killed so far