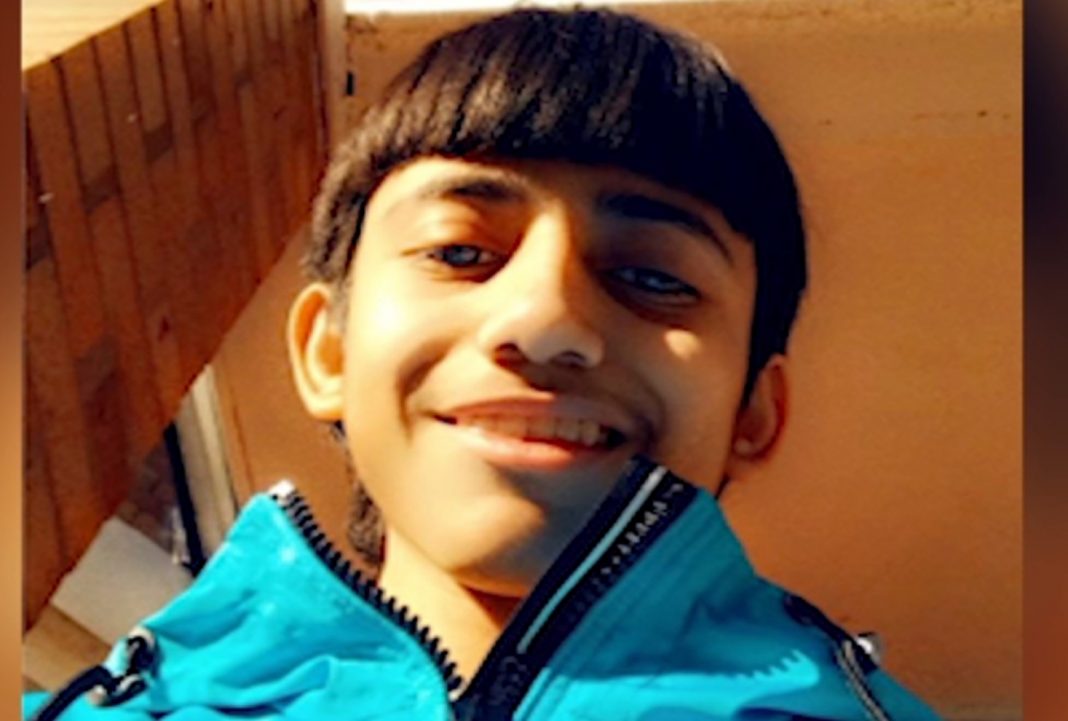 Chicago police have released graphic footage of an officer shooting dead a 13-year-old boy in a dark alley.

Bodycam video shows the policeman shouting “Drop it” before shooting Adam Toledo once in the chest on 29 March.

The boy does not appear to be holding a weapon in the split second he was shot, but police video shows a handgun near the spot where he fell.

Small protests were held on Thursday evening around Chicago, hours after the city’s mayor appealed for calm.

The video’s release follows the fatal police shooting on 11 April of Daunte Wright by an officer in a Minneapolis suburb.

That shooting has sparked violent protests as the city awaits the outcome of the trial of Derek Chauvin, the officer accused in the death of George Floyd.

The clip shows the officer jumping out of his squad car and chasing the Latino boy on foot down a dark alley as another suspect disappears from view.

The boy turns and raises his hands. The officer shouts “Drop it” and fires his weapon – 19 seconds after exiting his squad car.

Separate CCTV footage appears to show the teenager throwing something through a gap in the fence as the officer runs up to him. Bodycam video shows officers shining a light on a handgun behind the wooden fence after the shooting.

Read More  Why are Ugandan troops in DR Congo

The policeman calls for an ambulance while urging the fallen boy to “stay awake”. Other officers arrive at the scene in the Little Village neighbourhood on the city’s west side and CPR is performed.

Read More  Why are Ugandan troops in DR Congo

According to prosecutors, the teenager was with a 21-year-old man, Ruben Roman, who had just fired a gun at a passing car. The gunfire drew police to the area, resulting in the deadly confrontation.

Mr Roman appeared in court on Saturday charged with aggravated unlawful use of a weapon, reckless discharge of a firearm and child endangerment, according to local media reports.

The Civilian Office of Police Accountability released the bodycam footage on Thursday along with CCTV video, arrest reports and audio recordings of the shots fired in the area that alerted police.

What’s the reaction been?

Shortly before the video was released, Chicago Mayor Lori Lightfoot held a press conference where she called the footage “excruciating” to watch.

“Simply put, we failed Adam,” she said. “And we cannot afford to fail one more young person in our city.”

“We live in a city that is traumatised by a long history of police violence and misconduct,” the mayor said. “So while we don’t have enough information to be the judge and jury of this particular situation, it is certainly understandable why so many of our residents are feeling that all too familiar surge of outrage and pain.”

“We have heard reports in the media that more protests are planned today, and while we have no direct knowledge of such events, we pray that for the sake of our city, people remain peaceful to honour Adam’s memory and work constructively to promote reform,” they said in a statement.

At a news conference on Thursday, Toledo family lawyer Adeena Weiss Ortiz said the boy was not holding a gun in the moment he was shot.

But she said they could not say with “100% certainty” whether the teenager was carrying a weapon just beforehand, the Chicago Tribune reported.

The officer who fired the fatal shot has not been officially accused of wrongdoing. He has been placed on administrative duty pending the outcome of an inquiry into whether he followed proper procedure on use of force.

He is a 34-year-old military veteran who joined the force in 2015 and has no record of complaints, according to the Chicago Sun-Times.

The newspaper also reports that the Chicago Police Department has been on alert for potential retaliation against officers because the area where Adam Toledo was shot is a stronghold of the Latin Kings street gang.