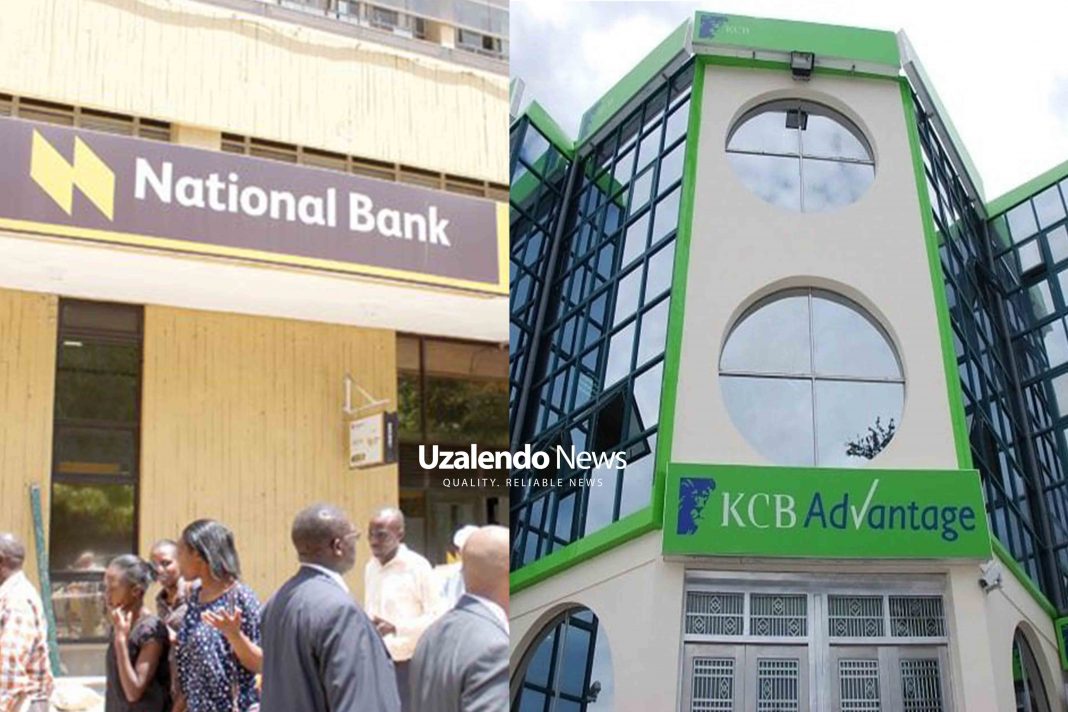 BY PRUDENCE WANZA – Two civil activists have moved to court seeking to suspend the intended acquisition of National Bank of Kenya (NBK) by the Kenya Commercial Bank (KCB) pending hearing and determination of the case.

In a certificate of urgency, Evans Aseto and John Kiptoo want the court to suspend any deliberation or negotiation in relation to the intended acquisition of National Bank.

Through lawyer Duncan Okatch, the two want orders compelling both banks to furnish them with documents and information in respect to the intended acquisition.

The activists said the Banks have embarked on a share swap transaction that will see National Bank duly acquired by KCB.

“The share swap or transfer is irregular on the basis that the same has been conducted in contravention of the basic tenets of the constitution, in that the National Treasury and the National Social Security Fund (NSSF) have up to 50 percent shareholding at National Bank making it a public entity and thus the public ought to have been involved by way of comprehensive public participation process which has not been done,” said the activists.

“Public participation in a transaction of this nature is couched in mandatory in the constitution and in its absence, the share swap/transfer is null and void,” they added.

They said to make the matter worse, both banks have not obtained authorizing order by Central Bank of Kenya and competition Authority of Kenya which  is the entity mandated to oversee such transaction and subsequently grant or deny approval to such transactions after careful consideration of the effect of the same would have on competition in the market.

They said application for approval by Central Bank of Kenya and Competition Authority of Kenya would entail submissions of an extensive report on the effect of the intended acquisition such as details on the fate of the employees of National Bank once the acquisition is completed. “In absence of such a report, the fate of the employees remains uncertain as some might end up losing their jobs.”

The activists added that in the view of the fact that both banks are listed companies trading on the Nairobi Stock Exchange, KCB has since issued a notice on the intended acquisition to the Capital Markets Act, is a clear indication that the firms are hell bend on pursuing the acquisition, the glaring irregularities not withstanding.

They said they are apprehensive unless the court intervenes, the banks will proceed with the transaction which is being conducted in defiance and contravention of fundamental statutory and constitutional provisions.

“Unless this court intervenes, due to the clandestine manner in which the transaction is being conducted there is imminent risk that the acquisition of National Bank (which is a public property) by KCB will proceed unchecked and the same right lead to pilferage and laws of public funds.

They added that the National Bank books have not been audited by the Auditor general and therefore the status or financial health or value is not clear and it is hard to tell whether National Treasury is getting commensurate value for the intended swap.

The civil activists further said various attempts by public investment committee have been futile as several summons to the directors of the National Bank to appear before the committees have not been honored and it is therefore clear beyond peradventure that the banks are not willing to shed light on the intended acquisition.

“The petitioners are apprehensive that the acquisition of National Bank by KCB will occasion loss of jobs to many Kenyans under the employment of the Bank and there is high likelihood that various positions will be declared redundant,” they said.