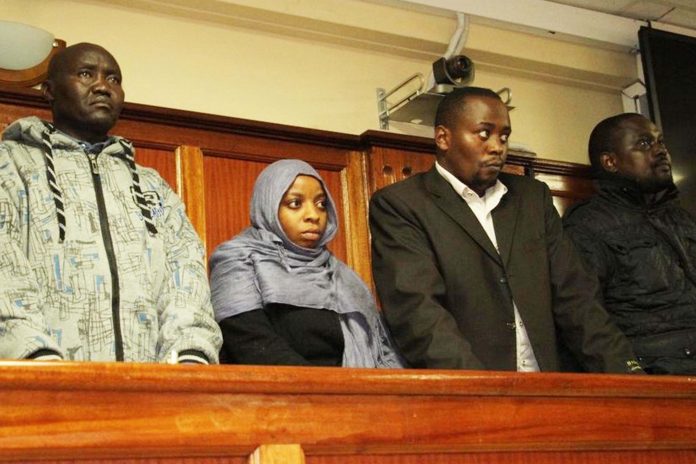 BY PRUDENCE WANZA – Five suspects on trial for the murder of lawyer Willy Kimani suffered a huge blow on today after lady justice Jessie Lesiit ruled that confession of one of them will be used as evidence.

Police informer Peter Ngugi gave an extensive confession to the detectives on video during investigations and later sought to disown it.
He claimed to have been duped that he will receive Sh 30, 000 monthly, a safe house and a car in order to lend a hand in the investigations.

But Lesiit said the video and statements were taken within the provisions of the law therefore they will be admissible in court.
Kimani was killed in Mlolongo on June 23, 2016.

He was abducted after leaving Mavoko law courts together with his client Josephat Mwenda and taxi driver Joseph Muiruri. They were all killed.

Ngugi gave graphic details of implicating himself and his co accused persons in the murder of slain human rights lawyer who worked for the International Jurists Mission (IJM).

Ngugi, and four AP officers Fredrick Leliman, Stephen Cheburet, Sylvia Wanjiku and Leonard Mwangi were charged with killing Kimani in court where they denied the charges.

Justice Lesiit said the use of the confession in the trial of the Ngugi and his accomplices is lawful.
She dismissed claims by the suspects’ claims that the case has delayed for long and that only seven witneses have testified since the start of the case more than two years ago.

“From the proceedings, I found that 37 witnesses have testified, 34 in 2017 and two in 2018. The case was adjourned seven times and most of those times the delays were caused by the defense.The prosecution sought only one adjournment which delayed the case by one day,” Lesiit said.

So far six witnesses have not testified. They include two officials from telephone services providers Airtel and Safaricom, three investigators and a witness who was stood down earlier.

The case will be heard between July 5 and 19.