Controversial businessman Jared Kiasa Otieno and his 15 co-accused persons will now be held for another 7days awaiting their bail ruling. 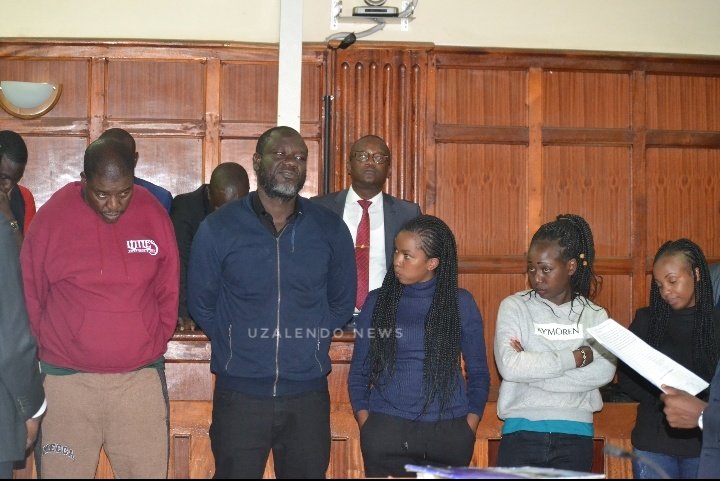 Jared, Aroko, Ouko and Ricky are charged with obtaining the Sh 300 million from the businessman at Kaputei Gardens in Kileleshwa, Nairobi pretending they had genuine gold.
Apart from Jared, the other 15 accused persons are charged with counterfeiting trademark. The court heard that on 13th May this year, the accused persons jointly with others not before court, counterfeited Ghana Customs Authority stickers trademark purporting to be genuine stickers authorized by the Ghana Customs Authority.
They are also charged with preparation to commit a felony of obtaining money by false pretenses since they had in their possession fake gold bars, heavy metal boxes stuffed with bags of cement, mallet hammers and Ghana customs stickers all to convince unsuspecting people that they were carrying out genuine gold business.
They all denied the charges before Chief Magistrate Francis Andayi.
Their lawyers, led by Cliff Ombeta and Stanley Kangahi asked the court to grant their clients lenient bond and bail terms.
The court heard that among the accused persons is a gardener, taxi driver, and messengers arrested in the sweep and can nearly afford bail.
The magistrate noted that since the accused persons are of different status, there is need to get a pre-bail report before granting the accused persons bail.
The magistrate directed the accused persons to be remanded until Monday 27th.
The case will be heard on 1st July.