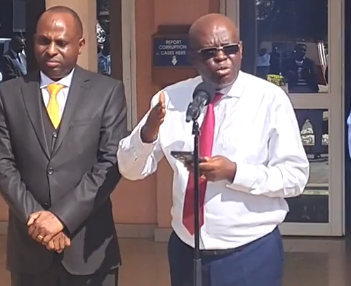 All striking Machakos Level 5 health employees will not get paid for the days they are not on duty.

Machakos Health CEC Daniel Yumbya issued a strong warning today, saying the county’s health workers’ go-slow was unlawful and they would not hesitate to take action.

Yumbya told the press at Machakos Level 5 that it is extremely damaging for Kenya Medical Practitioners and Dentists Union representatives, as well as their sister Kenya National Union of Nurses representatives, to issue strike notices to their members despite an agreement reached after a lengthy meeting with him.

Services at Machakos Level 5 and Kangundo Level 4 have been paralyzed since Tuesday this week, alleging delayed payment of their October salaries and the elimination of unnecessary allowances, including those for officers on paid study breaks.

Yumbya said that certain union members were removing patients from wards at Machakos Level 5 Hospital and claimed to have screenshots to prove it.