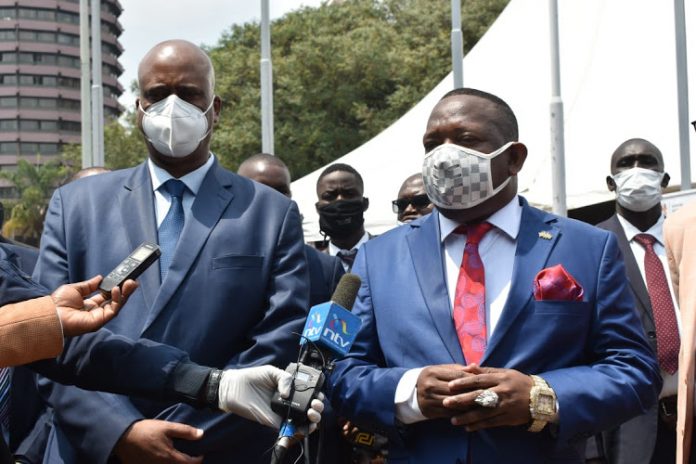 Mike Sonko and Major General Mohammed Badi, who are the Nairobi City County governor and Nairobi Metropolitan Services (NMS) director general, respectively has buried their hatchet barely a day after the resignation of Nairobi County Assembly Speaker Beatrice Elachi with whom Sonko had an elusive relationship.

The two shared podium in an event presided by President Uhuru Kenyatta at the Kenyatta International Conference Center on Wednesday when he issued title deeds to a section of residents from informal settlements.

The President cautioned the two leaders to stop politicking as it with jeopardize delivery of services in the city thus hampering development. The Head of State further stated the primary role of leaders is to deliver services to citizens, he urged the two leaders to ensure they halt the politics and focus on doing what they were elected and appointed to do respectively.

In an upshot to Governor Sonko President Kenyatta admonished him for constantly directing tirade on the army General, despite the fact that he is not a politician but a military man who was appointed for a while to oversee the smooth and efficient running of development in the city after which he shall go back to protect the citizens. “General Badi is not a politician. I assigned him to head NMS and once he accomplishes his task at the County he will go back to the military and continue protecting our citizens,” Uhuru said.

Sonko regretted the incidences that had fueled the feud between him and the General, he promised to forge a harmonious working relationship going forward. “Today I want to apologize on anything bad that I have said against my brother Badi, going forward we will work together in implementing development projects in this great city,” said Sonko.

On his part Major General Badi said the differences that had been witnessed between the County leadership and NMS is now water under bridge and his focus now is a harmonious working relationship with the governor going forward. “There is no hate between us and as you have heard our interest is to deliver services to the people of Nairobi and bring development,” Badi said.

To assure the Nairobians that his promises are not idle talks aimed at appeasing their boss President Uhuru Kenyatta who was present, Badi said coming Friday the two will preside over the launch of Michuki Park. “Moving forward we will be on the ground together and that is what is expected of us to bring development in Nairobi,” he said.

In other developments the presided prevailed upon those who received the titles to make good use of them.

He asked them to desist from selling their small package of land instead preserve it to help ther future generations.