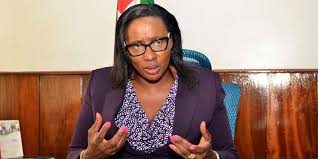 The dramatic and chaotic former Nairobi speaker Beatrice ELachi 3-year rein came to an end as forces behind city hall pushed her to resignation.

In her resignation Elachi cited threats to her life and family; power tussles and frustrations as reasons to why she had to quite.

Speaking on an interview on a local TV station Elachi sort to point at what she christened as chronicles of city hall played role in pushing her out, she narrated a plan by mcas to pour sulphuric acid on her face, death threats that were meant to teach her a lesson, empty coffins and organized armed gang were reasons enough to make resign. She also mentioned the cartel network with huge interests at city hall is curtailing service delivery to Nairobi residents

Sonko posted two Songs on his Facebook page ‘’ there is a God in heaven who listens to our cries and answers our prayers” and ‘we have seen your hand lord and your deeds are great”.

The lost relations where Sonko has accused Elachi of undermining his administration especially in at the legislation, one in point was the shs 15b budget that was to be given to NMS,

Elachi inclination to the NMS was a big worry for Sonko who read the riot act to her and did reciprocate with mobilizing MCA to oust Elachi through impeachment motion.

The runaway relationship with the once ousted then reinstated majority leader put her on coalition path with the house,

Guyo first attempt to impeach Elachi was successful, on her reinstatement Elachi fought back and Guyo was removed as majority leader only to be reistated by the party. Elachi in her position as speaker refused to communicate the changes to the house, setting her up against the party leadership.

Her insistence on the new county clerk Edwin Gichana against the wish of some of the Mcas status quo did actually fuel the drama at county assembly.

On 28july 2020 another bid to Impeach the former speaker turned chaotic, with a county assembly member Mutheu injured in the scuffle with police, a move that interior ministry cs had to term the county assembly as a war zone and need to put up of a police post.

Interestingly in the latest disciplinary sermons by the jubilee party Mcas, aligned to the embattled speaker were summoned to show Course why charges should not be pressed against them, they include John Kamangu deputy speaker and Mca Ruai, Millicent Mugadi-Ziwani, Jeremiah Karani –Dandora among others on the disciplinary list.

This again proves doubt on the party’s trust in Elachi at the county assembly.

Sources indicate that the president met the Nairobi Mcas in a bid to resolve the impasse, however the members instead requested to that Elachi be removed if calm was to be restored at the county assembly.

A move that the president might have conceded to. In her resignation communique she addressed it to the president an instead of the county clerk as it is required by the law. This could point at the president’s intervention and might have prevailed over her to resign owing to their close working relationship.

The acting clerk advertised the vacancy for the speaker’s post and application are since being made, the jubilee party has since called a plenary meeting with its members to reach a consensus on who the next speaker will be.

The election of the county speaker is expected to be held on Friday 14th at 2:30PM that would mark an end to Elachis chaotic error.