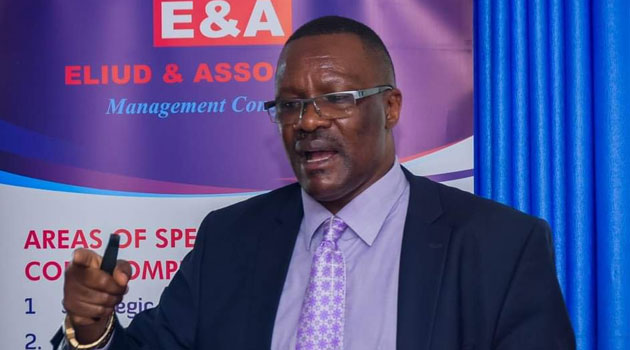 Former Raila Odinga strategist Eliud Owalo has left Amani National Congress. His resignation comes barely a week after the resignation of another powerful figure in Barrack Muluka, who served the party as the Secretary general.

In his resignation letter as obtained by Uzalendo news, Owalo cited the need to allow the party leader space to craft his 2022 presidential campaign. “… to enable the ANC strategically position itself effectively in the operational environment and craft a suitable road map moving forward without feeling suffocated by my views and suggestions,” the letter reads

“I also want to create a reasonable leg-room between myself and Mudavadi to safeguard and sustain our personal friendship, respect and positive professional engagements that has been in existence over a span of 25 years,” the letter further explains

The kibra 2019 by election aspirant had ditched ODM in 2019 to join ANC, the Mudavadi -led political party. He contested for the Kibra parliamentary seat in a by election that he lost only coming a distance third behind jubilee candidate Mac Donald Mariga who garnered 11000 vote while he Owalo got a paltry 5000 votes. Imran Okoth won the seat on an ODM ticket after garnering 24000 votes. The seat fell vacant after the former MP Ken Okoth passed on.

When he resigned from ODM, Owalo in a strong worded letter both to the party and as copied to the registrar of political party he cited divergence of political ideology as well as personal reasons as reasons for his exit.

“My resignation is informed by the fact that my political ideology, convictions and belief no longer has convergence or depict any congruence and common denominator with that of the ODM Party; its value-orientation and practices. Consequently, there is no iota of enthusiasm remaining in me to warrant my continued stay in the ODM Party; thereby necessitating my strategic exit from the Party by way of immediate resignation,” the letter read.

His resignation is being alluded to the pressure from the party that has changed tact and restructuring in readiness for the 2022 general elections.

The party recently endorsed Musalia Mudavadi as its flag bearer in 2022 general elections. Reports also indicate that there a loming changes to include more factions that will give the party a national outlook.

His exit mirrors Barrack Muluka’s resignation as ANC Secretary General on Wednesday, the senior member of Mudavadi’s think tank having cited the need to allow Party Leader Musalia Mudavadi the latitude to make critical decisions ahead of the 2022 presidential poll. In a letter addressed to Mudavadi on Wednesday, Muluka said ANC needs a fresh start ahead of 2022 polls.

“I doubt that i could add more value to what i have done so far. Moreover, it is now fitting that the space around you should be decongested. this will allow you to make critical decisions on the population and leadership of the party under the new constitution,” he said. Muluka said his resignation will ease Mudavadi’s making of personal political choices in the lead up to the 2022 elections.