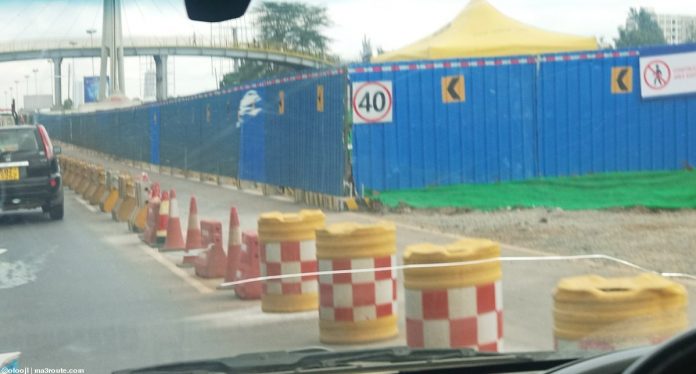 Social media has been abuzz with the allegations that the main footbridges located along Mombasa road are being earmarked for demolitions to pave way for the expressway – By Gerald Gekara.

However, the Kenya National Highways Authority has opposed this rumours, saying the contractor, China Road and Bridge Corporation (CRBC) are only digging up and moving water pipes, internet cables, and other piping located along the central reserve of the road.

“The only part of the Belle Vue bridge that is being removed is the iconic ‘anchor’ that lies squarely at the center of the highway,” said KeNHA through its communication office.

The anchor that is synonymous with the footbridge is said to have been put up for aesthetic values, therefore moving it would not affect the stability of the footbridge, nor the safety of pedestrians.

The construction of the footbridge in 2015 was key in reducing pedestrian-related accidents along the busy highway. Therefore we will maintain the bridge” he added.

Other concerns that were noted were the complete overhaul of the footbridge at the General Motors (GM) stage. According to KENHA, the design will be revisited in order to provide a safer footbridge that will span across the expansive road.

Other footbridges will be constructed along the 26.7km expressway in order to provide safe passage for pedestrians and other road users.

The project, a first for Kenya, will see major redesigning of a standard Kenyan road, in order to facilitate faster commute in Nairobi’s busy traffic.

These will facilitate smooth entry and exit from the Expressway.

Safaricom, KWS partner to save the Roan Antelope