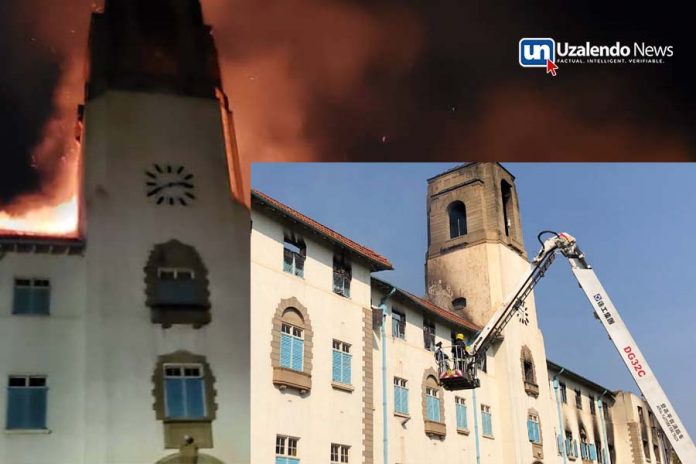 The iconic Makerere University administration block has been burned to ashes.

The cause of the raging inferno yet to be established. – By Henry Kimoli

According to a Lecturer at the institution, property and literature worth billions was destroyed.

The administration block, christened the ‘Ivory Tower’, had a lot of rich victorian type wood work due to its ancient beginnings.

It was constructed by British colonialists and remains one of East Africa’s most prestigious learning centres.

Vice-chancellor Barnabas Nawangwe, who expressed his dismay in a tweet, described the destruction as unbelievable.

“It is a very dark morning for Makerere University. Our iconic Main Administration Building caught fire and the destruction is unbelievable. But we are determined to restore the building to its historic state in the shortest time possible,” Vice-Chancellor Barnabas Nawangwe tweeted.

Derek Peterson, a renown East-Africa historian says the fire is a disaster for Uganda and for East Africa as a whole.

“The building holds student records, and the basement is full of archive files spanning the whole history of the institution,” he tweeted, adding that he had been intending to help organise a project to catalogue the collection.

Police have launched an investigation into the cause of the fire.

Phillip Nzamba Kitonga, the man who midwived the 2010 Kenya Constitution is dead