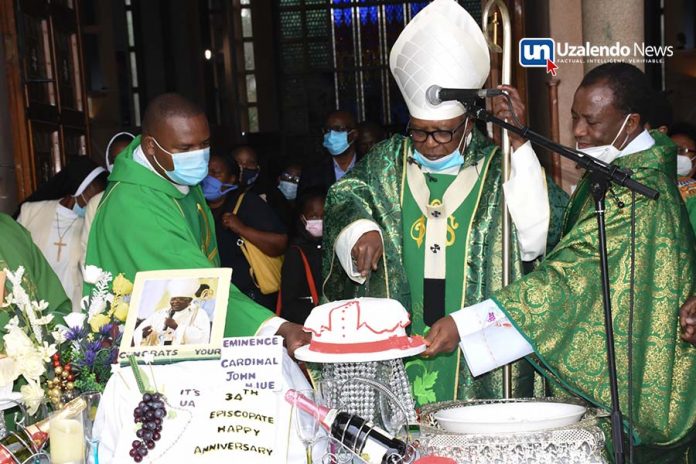 Njue, 76, may have celebrated his last Anniversary as the Archbishop of Nairobi. – By Meshack Makau

This is because Catholic Bishops retire at the age of 75.

According to the Canon Law, archdiocesan/ diocesan Bishops including Cardinals are requested to submit their resignation to the Pope on reaching the age of 75 years.

Njue is the defacto Bishop of Nairobi and falls under this category.

He will be remembered for the role he played in ensuring that the Catholic Church continued to provide spiritual services during the Covid 19 lockdown.

Any of the current Bishops can be detailed to take over the Nairobi Archdiocese which includes Kiambu, parts of Muranga, Kitui, and Machakos.

Bishop David Kamau acts as the auxiliary Bishop of Nairobi.

Njue, a humorous priest who loves to sing during Holy Mass was appointed a Bishop in June 1986.

He has since served in Embu, Nyeri Archdiocese, and Nairobi.

The Cardinal is expected to retire anytime after reaching the mandatory retirement age of a Bishop.

Njue, the first Bishop of Embu was appointed in 1986.

The prelate was ordained into the priesthood in 1973 by Pope Paul VI and served for 13 years before he became a Bishop.

Between 1973 and 1986 he served in Meru, Taught Philosophy at the National Seminary of Bungoma, undertook a Spirituality course in the United States of America before serving as a priest in Chuka.

His Eminence was appointed as the Archbishop of Nairobi on October 6th, 2007, and was installed on the 1st November in the same year.

Cardinal Njue has since taken part in many activities that include being part of the cardinal electors who participated in the 2013 papal conclave that elected Pope Francis. He took part in advising against participation in a free government program to vaccinate women of reproductive age against tetanus in 2014.

In a short message today, the Cardinal took congregants through his priesthood journey. He thanked Christians for their love and support during the long pastoral journey.

After the Mass, Njue shared a cake with the congregants which read congrats.