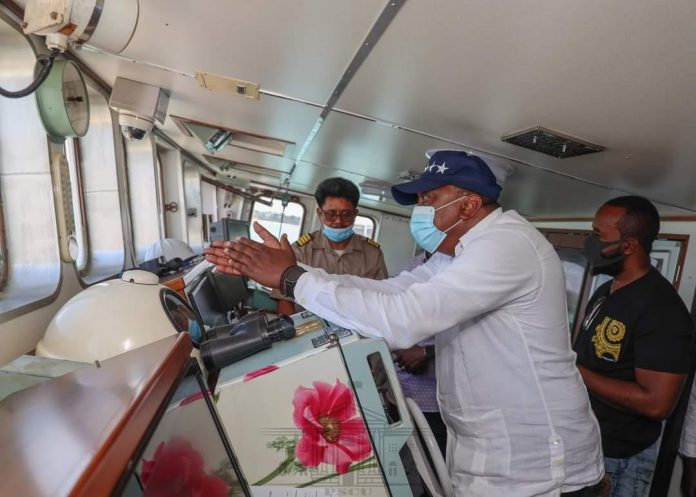 The Head of State started his day-long inspection at Liwatoni on Mombasa island where the government is constructing the Shs1.9bn Likoni pedestrian floating bridge.

The 1.2 kilometer bridge, the first of its kind in the region is at 51 percent completion rate and will be ready for use by end of this year.

When complete, the bridge is expected to ease pressure on the Likoni ferry crossing by taking up most of the foot traffic, leaving the ferries to serve vehicular cargo between Mombasa and the South Coast.

From the bridge, the Head of State who was accompanied by Mombasa Governor Ali Hassan Joho crossed over to the adjacent Liwatoni fishing complex, a facility that the Government is upgrading into a full fishing port.

The President expressed satisfaction with the ongoing rehabilitation of the fish landing site which he said will help create jobs for the youth and boost the coastal economy.

Speaking to small-scale traders at Liwatoni, the President rallied them to take advantage of the bridge and fishing port projects to grow their businesses.

President Kenyatta tasked Governor Joho to work with national government agencies in developing modern business stalls in the area so as to enable the traders benefit from the increased human traffic expected when the bridge comes into use.

On his part, Governor Joho said his administration will continue partnering with the national Government in implementing projects aimed at improving the wellbeing of Mombasa residents.

From Liwatoni, the Head of State took a boat ride to the new Kipevu Oil Terminal (KOT) where he was received by Infrastructure CS James Macharia.

The Shs 40 billion new KOT, which is currently under construction, is a 200,000 DWT capacity facility capable of handling import and export of all petroleum products.

The oil jetty has a dedicated high volume Liquefied Petroleum Gas (LPG) channel which is expected to enhance supply of cooking gas in Kenya and the region.

The new KOT is part of an elaborate Mombasa port expansion programme that includes the construction of new dry cargo berths, sites the President also visited.

From the port, the President crossed Kilindini channel to the Kenya Navy Base in Mtongwe where the military is developing an ultra-modern slipway and shipyard.

In Mtongwe, the Head of State was taken on a tour of the new facility by the Commander of the Kenya Navy Major General Jimson Mutai.