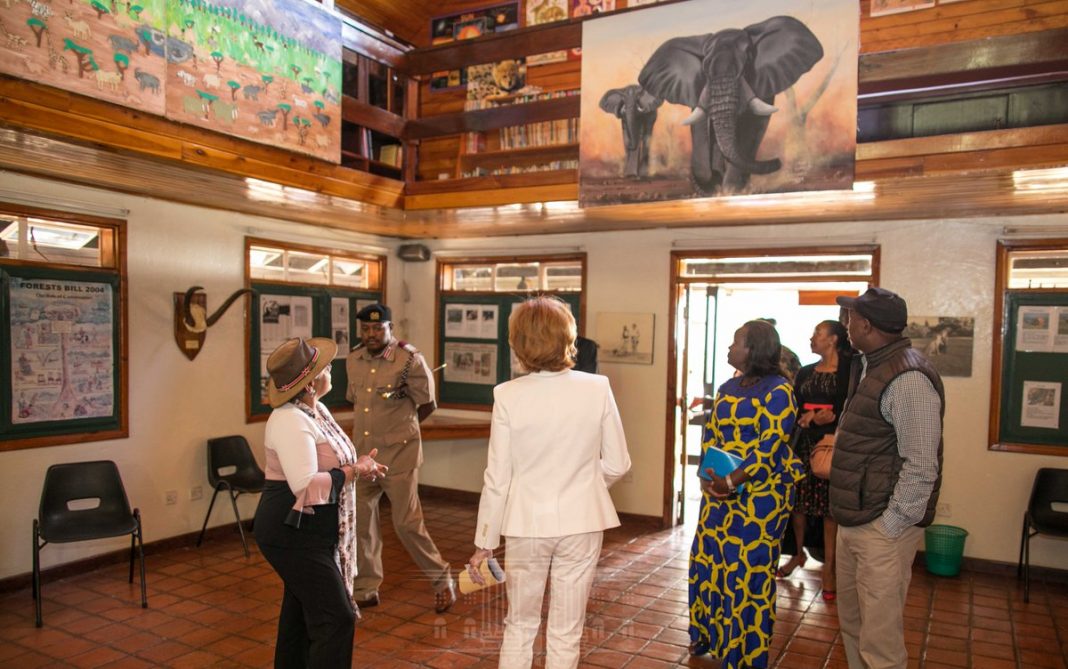 First Lady Margaret Kenyatta today said our unique wildlife heritage sets the country apart from the rest of the world and should be accorded special protection for the sake of the economy and future generations.

She described Kenya’s expansive wildlife species, notably elephants and the rhinos, as a  special gift from God to the country.

The First Lady said Kenyans will have failed their country and future generations in a big way if they won’t be able to secure their elephant and rhino population from extinction.

“If we fail and find the environmentalists’ predictions of extinction of our precious wildlife, especially the elephant and rhinos to be true, we shall have truly failed our future generation – our children and children’s children,” said the First Lady.

She spoke in Nanyuki , during celebrations to mark the 35th anniversary of the William Holden Wildlife Foundation (WHWF).

The Late William Holden, one of America’s biggest Box Office Film and TV actors and celebrated Academy Award Winners of the 1950s and 1960s, was one of the leading conservationists in Kenya.

He visited Kenya as a hunter in 1954, fell in  love with the country’s wildlife, and decided to dedicate his life to conservation through the Mount Kenya Game Reserve.

Upon his death in 1981, his partner and former actress Stefanie Powers founded the William Holden Wildlife Foundation to continue the work of the renown conservationist. She is currently the president of the foundation.

WHWF is a not-for-profit organization whose principal project is the William Holden Education Centre in Nanyuki which is dedicated to wildlife conservation and environmental studies for local people and occasional visits from international groups.

The centre focuses on the educational component of wildlife and environmental protection and habitat protection. It lays great emphasis on practical methods of sustainable accessibility to all.

Besides protection of the endangered animal species including the mountain bongo, the centre undertakes research in animal reproduction using captive breeding programs. The centre also runs an animal rescue centre to care for orphaned animals.

“I applaud the work of the Foundation in its innovative Wildlife Education program that has served over one million people, mostly Kenyans to learn about the importance of protection and conservation,” said the First Lady who took time to familiarize herself with the work of the foundation.

Over 11,000 students from all over the world visit the centre each year.

The First Lady said the centre, along with the activities it supports is an exemplary demonstration of the sustainable utilisation concept that helps communities to protect a resource besides reaping huge benefits from the asset.

“This program has been very impactful to educate and equip communities living with wildlife to participate in wildlife protection,” said the First Lady.

The centre supports local schools through infrastructural development and distribution of books and other learning materials and equipment.

First Lady Margaret Kenyatta paid tribute to the late Holden whom she described as a great champion of conservation work and praised Ms Powers (who was the host) for protecting Holden’s legacy through the work of the WHWF.

“I congratulate Stephanie Powers, for your remarkable vision to protect William’s legacy, his vision, and his passion, through the William Holden Wildlife Foundation,” the First Lady said adding that the late Holden remains a great inspiration to those who knew him and his contributions in conservation.

She said Holden’s initiatives were a good example of what citizen activism means, environmental stewardship and making a difference.

The First Lady who is a great champion of wildlife conservation, is the patron of the “Hands Off Our Elephants” campaign that brings together government agencies, the civil society and other conservation organization in a unified approach towards ending  the poaching crisis in Kenya.

Since 2013 when the campaign was launched, it has succeeded in generating unprecedented public and political awareness and support for wildlife conservation.