Songs of freedom: The soundtracks of political change in Sudan 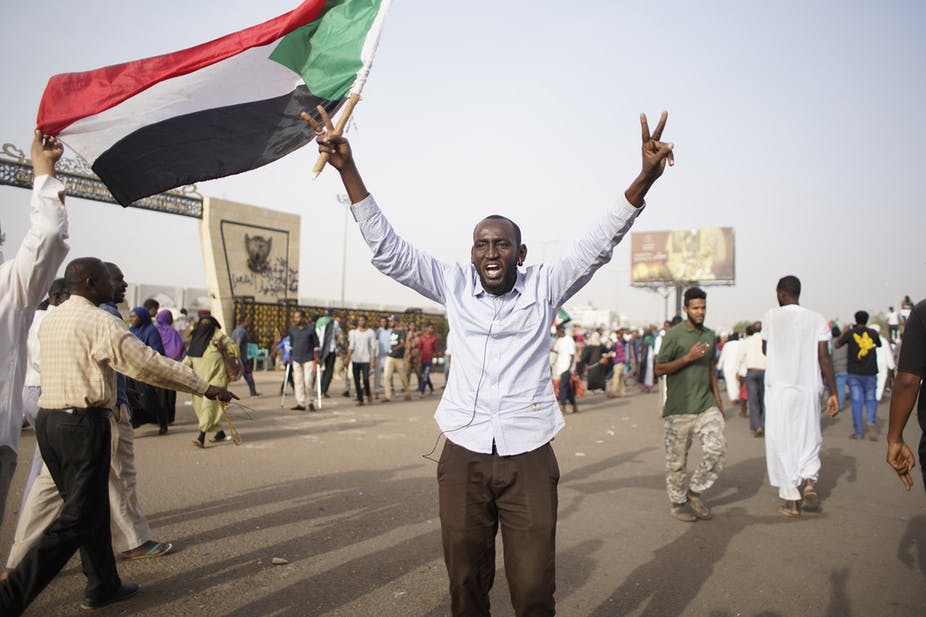 Uzalendo Newshttps://uzalendonews.co.ke/
Do you have a story that you think would interest our readers? Write to us 'info@uzalendonews.co.ke'
Mohamed A. Satti, American University of Kuwait

The uprising in Sudan has been vocal – and musical. “Tasqut bas!” – just fall, that’s all – was a commonly-used slogan by Sudanese as they revolted against military dictator Omar al-Bashir’s 30-year rule. The uprising, which began in December 2018, intensified over the following weeks, forcing Al-Bashir to step down on 11 April 2019.

Sudanese played a crucial role as they camped in front of the compound housing the military and security services in central Khartoum. For five days, the protesters refused to budge until the army removed the president from power.

During the days in early April, when the revolution gathered steam, the government expelled most international media outlets. So it was up to the citizens to capture the uprising on cellphones. These cellphone images and videos were soon circulated on social media platforms to Sudanese in the diaspora and to a global audience. Local media outlets continued with regular programming despite the government’s efforts to impose a media blackout.

Cellphone footage from the heart of the revolution all contained one thing in common: the familiar beat of music. This was to be expected. Sudanese music has always been heavily laden with political rhetoric.

The saying goes that everyone in Sudan is a politician, in reference to how politics creeps into everyday conversation. Sudanese also tend to be musically savvy and are inclined to know the lyrics to many popular songs by heart.

Previous revolutions in the country have been marked by particular songs. That hasn’t been the case this time, although the protesters chanted slogans to music that was accompanied by the persistent beat of drums.

The link between music and politics is not new to Sudan.

One of the earliest examples of how powerful lyrics drove political change was a poem entitled “Umm Dhafayir” – The Lady with Pleated Hair – by Obeid Abdul Nur, an educator and a poet.

Written in 1924, the poem urged Sudanese to rise up and fight against British occupation. The eloquently-articulated words highlighted the importance of the nation and urged the youth to fight for their homeland. Perhaps Abdul Nur’s rousing words provided inspiration to others to integrate political content in their lyrics.

“October Al Akhdar” (Green October) was famously performed by the revered singer Mohammed Wardi during the 1964 revolution that overthrew a military government and ushered in a civilian one. The song’s lyrics applaud the power of the people to bring about political change. The use of the word “green” in the title was a direct reference to agriculture and its importance to Sudan’s economy.

In 1985 Sudan again underwent change in its leadership through a popular uprising. Again the people took to the streets to oust a military government. Again elections ushered in a civilian government. And again, songs played a central role in the revolution.

Wardi’s lyrics played a powerful role this time too. His song “Ya Sha’aban Lahabak Thouritak” – which loosely translates to “Oh People Your Flame is Your Revolution” – referred to the immense pride and confidence Sudanese people have in their abilities. In the song Wardi yearns for Sudan’s population to stand up and to speak up for itself and to control its own destiny. The words empowered Sudanese to realise their ability to work for the good of the country with resolve and purpose.

Wardi died in 2012. The legendary singer is still celebrated as “The Last King of Nubia”.

Sudan has endured a total of almost five decades of military dictatorship since its independence in 1956. Its people yearn for political freedom.

Democratic civilian governments have never been allowed to serve out their time in office. Songs are therefore used to instil belief in the population. Music seems to lessen the pain and suffering during difficult times.

What the revolutions of 1964, 1985 and 2019 have demonstrated is that political and economic hardships push people to defy the government.

But songs also have a unifying power. The 2019 uprising is a testament to that. Shouts of “hurriyya” (freedom), “shaabun wahid jayshun wahid” (one people, one army) and “al shaab yurid ‘isqat al nizam” (the people want to overthrow the regime) were repeatedly heard.

These slogans and lyrics were often accompanied by the beat of drums, the shuffling of feet and the swaying of hips. On the day that al-Bashir was expelled, a video circulated of a group of protesters playing music. One was playing a saxophone while another beat on a drum. Those around joined in the festivities.

In 2019, songs provided motivation and guidance. Protesters in Sudan could easily have been dissuaded from pursuing their goal of instigating regime change. Al-Bashir’s three decades in power made him a cunning and wily power broker and the fear was that another uprising could be crushed like many before it. The removal of al-Bashir from power to be replaced by his defence minister isn’t the kind of democratic change that the protesters were looking for and it remains to be seen how the scenario will unfold in the coming days.

But whatever happens, the protesters have persevered, united by a common goal and guided by nationalist songs of freedom – songs that will ultimately be etched in Sudan’s history records.

Mohamed A. Satti, Assistant Professor of Communication and Media, American University of Kuwait