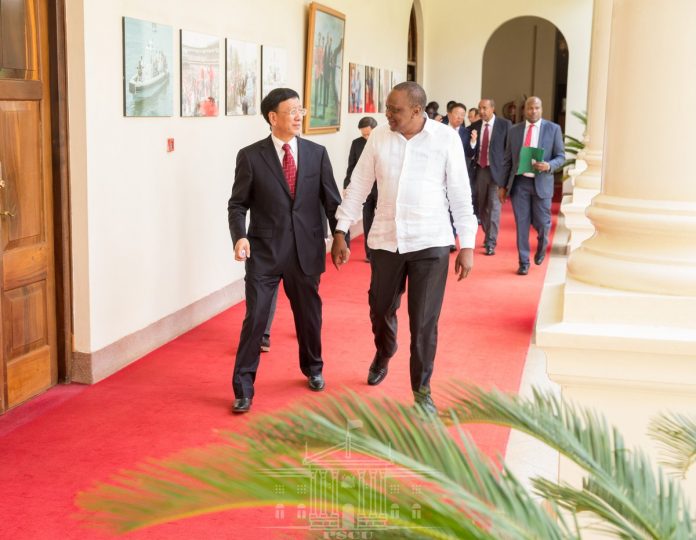 President Uhuru Kenyatta held talks with Mr. Cao Jianming, the Vice Chairman of the Standing Committee of the National People’s Congress (NPC) of China, who paid him a courtesy call at State House, Nairobi.

The meeting focused on cementing the existing enhanced bilateral ties between Kenya and China for the benefit of the people of the two countries.

President Kenyatta said the visit by the Vice Chairman of the Standing Committee of the NPC, the national legislature of the People’s Republic of China, affirmed the solid relations between the two countries.

“We have shared values that make our relationship stronger by the day. We value China as a close development partner,” President Kenyatta said.

The President pointed out that the close partnership between the two countries has seen implementation of Key infrastructure projects including the Standard Gauge Railway (SGR) and several key roads that have greatly improved the transport network, a key ingredient for growing industries and creating jobs.

The President said construction work is ongoing to take the SGR to Naivasha onwards to Kisumu and into the East African hinterland, a move that will open up the region and boost trade between Kenya and her neighbours.

“The ultimate objective of our two countries is to see mutual benefit and prosperity for the people of Kenya and China,” President Kenyatta said.

The Head of State said that Kenya is now looking at how to partner with China on the next level where the fruits of the infrastructure built can be enjoyed more by the people.

The President also noted that trade levels between the two countries have been low with exports from Kenya to China being less than those from China to Kenya.

At the multilateral level, President Kenyatta requested China to support Kenya’s bid for a non-permanent seat in the United Nations Security Council (UNSC) for the 2021 to 2022 period at the elections to be held this year.

Responding to President Kenyatta’s concerns over trade imbalance in favour of China, Mr. Cao assured that the relevant offices are working hard to ensure that China imports more goods from Kenya.

“We will continue to explore new ways of enhancing our cooperation even as we support the Big 4 Agenda that heralds great things for the people of Kenya,” said the Vice Chairman of the Standing Committee of the National People’s Congress of China.

He also delivered a special message to President Kenyatta from President Xi and said his visit to Kenya at the invitation of the Kenyan Parliament has been fruitful in elevating cooperation between the parliaments of the two countries.