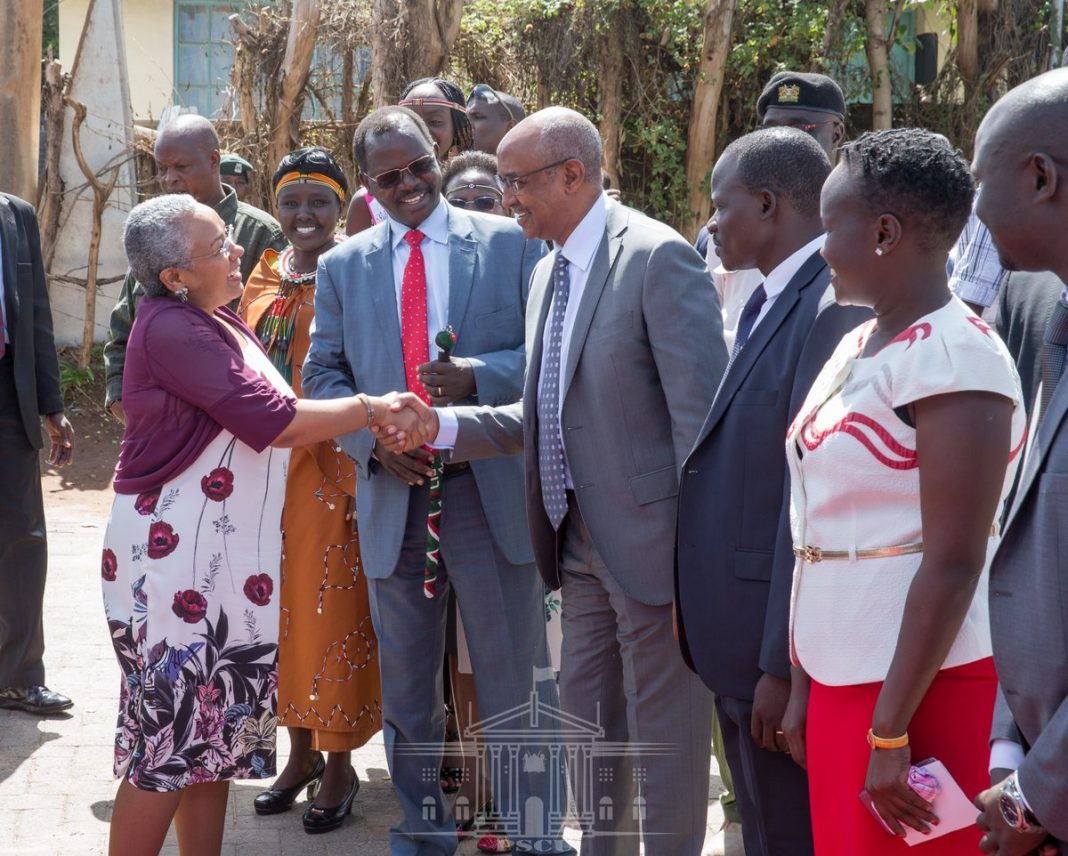 First Lady Margaret Kenyatta has said she will remain steadfast in her efforts to take healthcare services closer to Kenyans in all parts of the country.

She emphasized her commitment to her promise of ensuring that the people of Kenya, especially mothers and children, are protected from preventable illnesses and deaths.

“I believe that everyone – girls and boys, men and women – must have a chance to reach their full potential; an opportunity to pursue their dreams and contribute to the development of their community. This is all possible with good education and access to quality healthcare services,” the First Lady said.

The First Lady was speaking today at Makutano Stadium, West Pokot County, where she officially launched the 3rd Beyond Zero Medical Safari.

“I am deeply touched to see so many women, men and children participate in this medical camp, many of you coming from far and wide,” she said.

The medical safaris are part of the second phase of the First Lady’s efforts to boost delivery of healthcare services in the country, especially women and children through her Beyond Zero Initiative. The first phase entailed the delivery of fully equipped mobile clinics to all the 47 counties.

First Lady Margaret Kenyatta voiced her support for efforts geared towards curbing harmful cultural practices that affect the wellbeing of women and girls among them early marriages and Female Genital Mutilation (FGM).

During the four-day medical safari which started on May 7th and ends on May 10th, residents of West Pokot are receiving free treatment for various medical conditions including fistula surgeries.

The First Lady, who had earlier opened a reproductive health theatre and commissioned a cryotherapy machine at the Kapenguria County Referral Hospital before launching a satellite blood bank constructed and equipped at a cost of Kshs 40.1 million, commended the West Pokot County Government for giving provision of healthcare services the attention it deserves.

“I commend the efforts the county leadership has made towards increasing the number of nurses and resource allocation to its health facilities, including the new satellite blood bank, so that this county can achieve better health outcomes and continue to save many more lives,” the First Lady said.

“These are valuable steps in leading this region to become a model centre of excellence in health,” she added.

She pointed out that the Beyond Zero medical safaris are aimed at bolstering county government efforts to bring healthcare services closer to the people and respond adequately to critical health challenges that affect the poor and vulnerable populations.

The First Lady praised the partnership of stakeholders in the health sector including the National and County Governments, the UN family, NGO’s, the Private Sector and the media, saying it is a testament of the country’s collective aspiration to achieve Universal Health Coverage for all Kenyans.

“I am confident that by working hard together we will, as a nation, achieve our health targets and leave no one behind,” she pointed out as she thanked County First Ladies for their continued  support of the Beyond Zero Initiative.

She expressed optimism that the National Strategic Framework for Fistula will strengthen the resolve to eradicate the burden of obstetric fistula in Kenya.

“This will accelerate our efforts to provide our women and girls access to treatment as well as help us to better plan for budget inclusion and training of medical staff to increase capacity of our health workers in this area,” she said.

The First Lady also launched the West Pokot Business Plan for the elimination of Mother-to-Child Transmission (eMTCT) of HIV which outlines how the county will increase resource allocation for eMTCT.

The event saw the signing of the Facility Improvement Bill for West Pokot County by Governor Prof. John Lonyangapuo. The Bill, the first of its kind for county governments, is set to revolutionize the improvement of health facilities in the county.

Speaking during the occasion, Governor Lonyangapuo thanked First Lady Margaret Kenyatta for her support in the provision of healthcare services in West Pokot and singled out the Beyond Zero mobile clinic as a key health asset to the county.