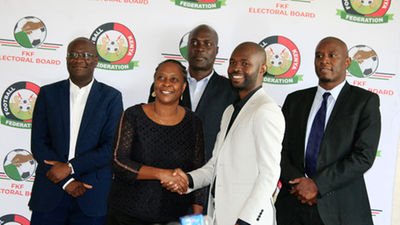 Football Kenya Federation’s Electoral Board has released the calendar and guidelines for the upcoming FKF elections, following the Board’s receipt of communication from World Governing body FIFA.

The electoral process is set to begin a fresh, from the county level to the national level and thereafter the subcounty level, as provided for by the FKF constitution, FIFA Standard Electoral Code and the FKF Electoral Code.

Further, for fairness and in respect of the rule of law, the Board has agreed with both FIFA and FKF on a new candidature eligibility criterion as provided for under article 27 of the FIFA statutes and in line with the FIFA Standard Electoral Code as detailed below:

In consideration of the economic impact occasioned by the Covid-19 pandemic, candidates who had submitted their nomination papers in the last FKF elections, both at national and branch level will not be required to resubmit their paper or pay the prerequisite nomination fees.

However, any willing aspirant who felt left out will be accorded adequate time to submit their candidature and pay their nomination fees, as provided for under the existing FKF Electoral Code.

FKF members who wish to withdraw their endorsements and/or endorse a different candidate in accordance with the FKF Electoral Code are also free to do so, on the days provided for in the Electoral Calendar.

The voter register, meanwhile, shall remain the same. However, for transparency and fairness, the board in its Electoral Road map, has allocated days for raising and resolving disputes regarding the register, including the eligibility of clubs. The board encourages any individual(s) with such complaints to table the same, within the set timelines as published in the Electoral Calendar and accompanied by the following mandatory documents:

Owing to the urgent need to conduct and conclude the FKF elections, both at the national and branch level, the said elections will be conducted in line with existing health regulations in the country for the safety and well-being of all concerned.

The Electoral Board in consultation with FKF and FIFA will continue to explore the safest options for conducting the said elections, including the possibility of delegates voting virtually, should the COVID-19 situation in the country deteriorate in the coming weeks.

The Board remains committed to overseeing free and fair elections within the statutory framework of both the FKF and FIFA statutes.

Jurgen Klopp: Liverpool boss enduring one of his most difficult spells after another defeat