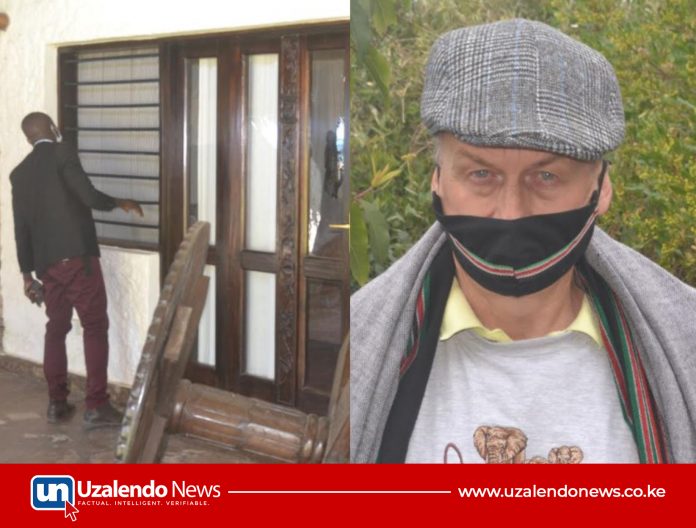 Fearing for his life even after losing Sh5.4 million to his Kenyan fiancée in Malindi, German investor has now flown out of the country. – By Ramadhan Kambi.

But even in his hideout, 66-year-old Reiner Hans Hermann Kreplin wants the police to arrest her so as to get his money back and be assured of his safety for him to live peacefully.

The investor said in an earlier interview that his Kenyan fiancée Mercy Adhiambo aged 24 from Siaya disappeared with 40,000 euros from his Harbour key villa in Malindi on December 10, 2020.

Speaking on phone from his hideout which he did not disclose for what he termed as safety reasons Kreplin said the police officer who was investigating the case from Malindi has taken too long to take action against the woman.

‘’I flew out of Kenya and I am currently in one of the East African countries for my safety because of the threats I was receiving from anonymous people who were always detecting my location,’’ he said.

Kreplin said when he reported the case at Malindi police station a police officer attached to the Tourism police unit was assigned the case and he has been very supportive in order for police to apprehend the suspect but all is turning out to be in vain.

“The money I lost was part of  a large sum of money I received after selling one of my properties in Germany so as to buy another villa at Harbour Key villa on 50/50 ownership agreement with my finance but only for her to steal 40,000 euros,” the German said.

He is currently, depressed and at times breaks out upon remembering the good plans he had with the fiancée and how he wanted to make huge investments worth billions in Kenya.

“I had plans to initiate a multi-million irrigation project in the drought-stricken area of Ganze constituency Kilifi county and a recycling plant all of which could cost Sh5 million Euros which have since stalled due to his misfortunes,” Kreplin Said.

According to Malindi Sub County Police commander John Kemboi, police are following up on the matter and had advised the investor to report to any police station for the DCI to begin investigations.

‘’Tell him to go to the nearest police station wherever he is and report the matter, the DCI will take it over and action shall be taken against the culprit,’’ he said.

Kreplin first came to Kenya in January 2019 as a tourist from Ethiopia where he was trying to make other investments but found it difficult.

The German national said he came here to find out what Kenya had to offer as an investment opportunity and was advised by friends from Nairobi to get a house in Mtwapa near Pirates beach which he did two days later.