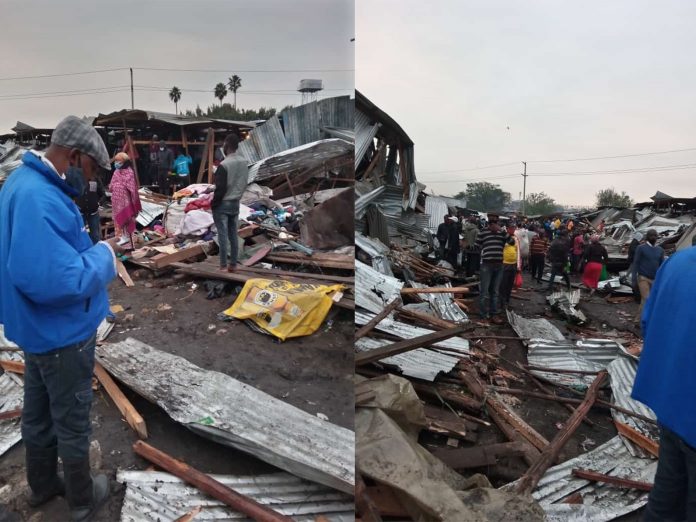 A section of traders in Nairobi’s Gikomba market, Nairobi, on Tuesday, watched in dismay as their stalls got demolished under the tight security from Police Officers – By Gerald Gekara.

According to the state, the demolitions were to pave way for road expansion and rehabilitation in the area.

This comes just two weeks after a mysterious fire razed down a section of the market that sells cereals and second hand clothes, just next to COTU offices.

The market has become a center of a raging battle between government, and traders who claim that the state was attempting to flash them out of the area to pave way for private developers.

However, the government said that the frequent incidents in the market are deliberate acts of arson by rival traders.

As part of the efforts to raise the quality of goods and services sold in Gikomba, the government also promised to modernize the market infrastructure, with the first phase set to be concluded within three months.

The roadworks will see an improvement in the accessibility of Gikomba, as business encroachment has left most streets muddy and narrow.

But some of the traders claim that there has been no official communication from the Nairobi Metropolitan Services.

Starehe MP Charles Njagua who was arrested for protesting against the frequent fires, questioned whether it was engineered by the government.