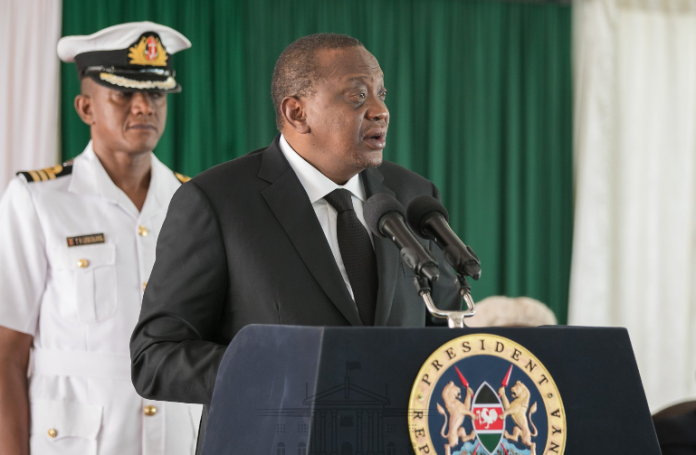 -track integration processes for continent to achieve faster development.
The President said that the current crop of leaders need to follow the legacies of the founding fathers of African countries by uniting people across the continent.
He spoke last evening at the Presidential Palace in Addis Ababa, Ethiopia, during a state dinner hosted in his honour by the Prime Minister of Ethiopia Abiy Ahmed and President Sahle-Work Zewde.
President Kenyatta called for the removal of all systemic barriers that hinder the blossoming of people-to-people relations in Africa.
“We need to build on the warm relations that exist between our governments to include our populations so as to foster people-to-people interactions,” President Kenyatta said.
He said that for Africa to defeat ignorance, disease and poverty the challenges that have continued to suppress the continent since the days of its founding fathers, Africans must work together as good neighbors and loving brothers.
“Our people should be let to travel throughout their continent freely without any hindrances. We are all brothers and sisters with a common heritage as Africans,” the President said.
The President commended the Ethiopian leadership led by PM Abiy and President Zewde for the progress being experienced in the country.
He said Kenya is keen on participating in the planned regeneration of Addis Ababa into a modern African city saying that it doesn’t make economic sense for Africans to keep spending financial resources needed to develop the continent in foreign capitals.
“Our African capitals belong to all of us. Addis Ababa belongs to Kenyans just like Nairobi belongs to Ethiopians. We therefore need to partner in the transformation our cities,” President Kenyatta said.
“It doesn’t make any sense for fellow Africans to keep spending our hard earned money in other people’s countries when we can develop our cities to world class standards. Kenya will participate in the modernization of Addis Ababa by sending over a team of entrepreneurs,” he added.
PM Abiy said Kenya is a key development partner of Ethiopia and thanked President Kenyatta for the visit which has renewed the longstanding friendly relations between the two East African nations.
He thanked President Kenyatta for agreeing to be part of the Addis Ababa modernization project and said that all countries in East Africa should work on regenerating their capitals.