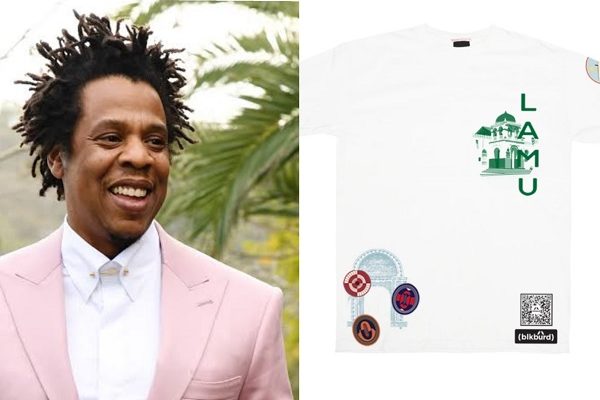 One of Kenyan’s island Lamu has gone big after American Hip Hop legend Jay-Z wore a T-shirt that touches on the Muslim faith from the region. – By Stephanie Mwangi

The music /business mogul was spotted in California wearing a t-shirt bearing an image of Riyadha Mosque, which is a worship center happens to be in Lamu .

The T-shirt   was designed by a popular US based Kenyan designer Zeddie Lukoye who is the CEO of Blkburd Genes , he was really happy that Jay-Z promoted his designs he took to social media and expressed his joy saying that his idea was meant to market Lamu’s historical heritage and rich culture

This didn’t auger so well with the Muslim faithful’s of Lamu and the management committee of the mosque and Islamic center say that they actually feel insulted by the photos of his wearing the t-shirt.

“When wears of these t-shirts end up in bars, clubs, and at all sorts of sacrilegious joints, it is certainly an affront to the spiritual respect and dignity towards all those who revere the mosque its founders and the general Muslim community within and outside Lamu”

We therefore  politely write to you show respect for the mosque by removing our Mosque’s portrait if actually you were guided by a sincere intention to display the Riyadha mosque as an icon of the Lamu world heritage site and the mosque as a national monument .”