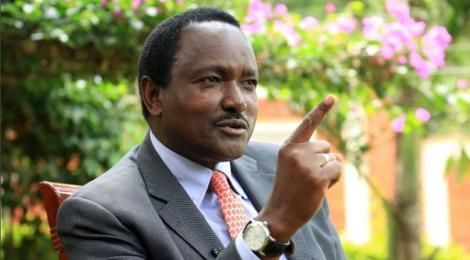 Wiper party leader Kalonzo Musyoka is set to run for presidencyif he is not chosen as former Prime Minister Raila Odinga’s running mate in the Azimio One Kenya coalition in the August 9 general elections.

Speaking to a local website on Friday, Makueni Member of Parliament Daniel Maanzo revealed that the party has already collected 2000 signatures from 24 counties and is prepared to field Kalonzo in the August elections if things do not go their way.

He also revealed that the party has decided on a possible running mate for Kalonzo, whose name will be submitted to the Independent Electoral and Boundaries Commission (IEBC) before the Monday, May 16 deadline.

“The only reason he stopped his ambitions was to support Raila as his deputy. In the event that is not there, the law does not stop him from running. In the event Raila and President Uhuru Kenyatta change their mind, we will run on our own.

“We have collected all the signatures and they are ready. On the May 16 running mate naming deadline, we cannot miss that, we have identified a suitable running mate for Kalonzo,” he stated.

The Kalonzo ally explained that the party was supporting Raila’s candidacy in the hope of being given the running mate slot that had been negotiated with President Uhuru Kenyatta and the ODM boss.

The lawmaker went on to say that the final decision on Kalonzo’s candidacy would be announced in the coming days.