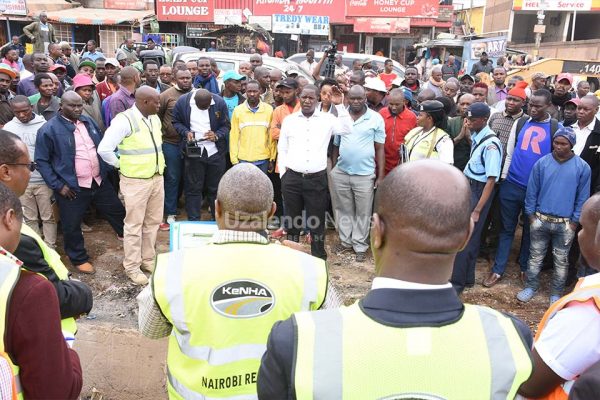 The project that was commissioned in November will cost the tax payer Ksh. 904 Million and so far half of the amount has been paid to the contractor. According to reports. the project is estimated to be complete in May 2022.

The Kangundo Road expansion has heavily touted as an opener to the eastern part of the county. It will feature dedicated service lanes to be able to access different exits, speed bumps to regulate speeding vehicles, pedestrian crossings and selected bus stops at different levels of the road reserves to serve the public.

While inspecting the works, the Director General, Eng. Peter M.Mundinia, took the opportunity to consult the public on what they may have overlooked while running the project. Construction of pedestrian walkways seemed to be the unanimous request by the road users. KeNHA then cautioned the public to avoid misusing the road amenities so as to experience its maximum benefits of the infrastructure.

The inspection was terminated at the Eastern Bypass intersection at Ruai, where KeNHA inspected major drainage works in the area, meant to improve the poor drainage experienced. He was joined by the Ruai MCA and Nairobi county’s deputy speaker, John Kamangu, Kenya Road Board engineers and Njiru ward representatives.