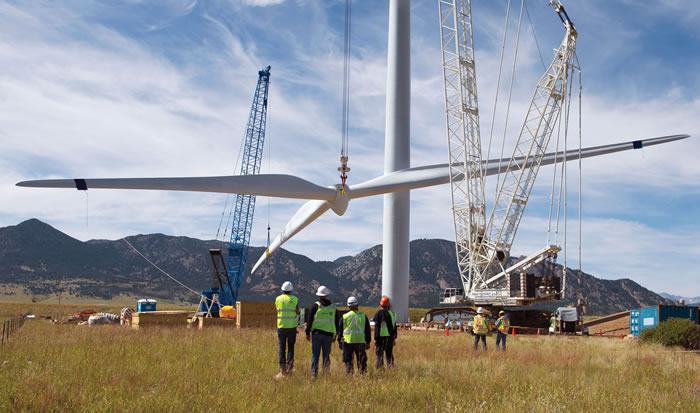 At the same time, the President commissioned the 428 kilometre high voltage power transmission line as well as the upgrading of Loyangalani tferifgugs368iiiiiiìo South Horr road.

The double circuit 1,200 megawatt capacity line constructed by the Kenya Electricity Transmission Company (KETRACO) evacuates the electricity generated at the plant to Suswa where it is injected into the national grid.

In the last eight months, the wind power project has saved Kenyans more than Shs 8 billion from reduced usage of the expensive diesel generated thermal power. Over the same period, the plant injected more than 1.2 billion kilowatt hours (KWh) of electricity.

President Kenyatta, speaking at the event also attended by Deputy President William Ruto, said the commissioning of the project was a proud moment for Kenya.

“With this monumental feat, as Kenya scores another first in Africa, I challenge all Kenyans to remain resilient builders who build best when called upon to build greatly,” said President Kenyatta.

Kenya is one of the countries leading globally in the development of renewable energy especially in the geothermal sector.

The President, who made an extensive tour of the expansive plant, said the government has stepped up efforts to encourage development of wind farms and other renewable green sources of electricity, by both KenGen and the private sector.

Kenya’s installed power capacity has increased from 1,768 MW in March 2013 to the current 2,712 MW, with the Lake Turkana Wind, Garissa Solar Power (54 MW) and Ngong Wind Plants (26 MW) joining the grid within the last year.

President Kenyatta said the commissioning of the project is a testament of Kenya’s commitment to pursue clean sources of energy. It is also a major boost to the country’s international commitments to lower greenhouse gas emissions.

He said globally, Kenya is celebrated as one of the leading countries in the world with an energy mix of over 85 percent from renewable sources especially from geothermal, a technology in which the country has become a continental centre of excellence.

“The successful implementation of Lake Turkana Wind Power demonstrates Kenya’s outstanding credentials as an investment destination in Africa and is a perfect example of the immense potential of the public private partnership model of implementing development projects,” said the President.

The President said Kenya’s progress in renewable energy will ensure the country’s scenic beauty and unique ecosystems are preserved and protected for both present and future generations.

He said the successful completion and operation of the project is a testimony of the vital role played by collaboration between the public and private sectors in the development of the country.

“I invite other investors, not only within the energy sector but across the full spectrum of the economy, to join hands with government in conceptualizing and delivering transformative projects that secure measurable returns for our people as well as the investors,” said the President.

Deputy President Ruto said the success of the project was a result of unity and commitment of all stakeholders who included host communities, various development partners and the private sector.

Dr Ruto thanked the President for personally taking charge in ensuring the project which consists of 365 turbines each with a capacity to generate 850 kilowatts of power was successfully executed.

Energy CS Charles Keter said the ministry is working to ensure that locals are connected to the national grid as soon as possible while the chairman of Lake Turkana Wind Power Mugo Kibati said the Vision 2030 flagship project is a showcase of Kenya’s maturing profile as an investment destination of choice in Africa.

Other speakers included Marsabit Governor Mohamud Ali and his Samburu counterpart Moses Lenolkulal. The two leaders commended the President for his commitment to improving the livelihoods of all Kenyans by undertaking transformative development projects throughout the country.