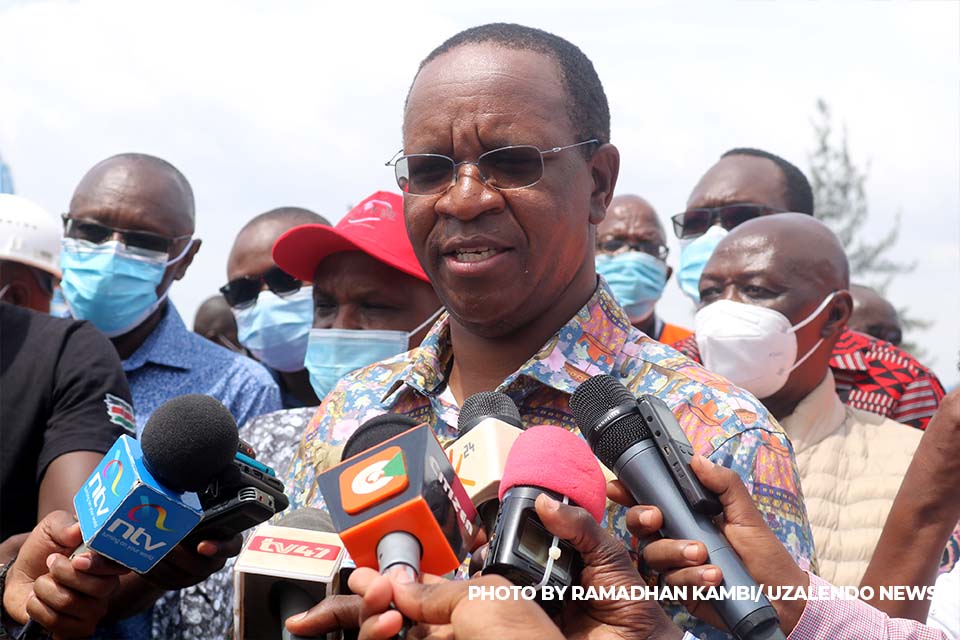 Interior PS Karanja Kibicho has assured Kenyans that the government is committed to ensuring that operations at the Multi-Billion Lamu port investment go unperturbed.

Dr Kibicho spoke at the port of Mombasa where he is in the region to inspect government projects.

“I understand that there are some insecurity challenges in Lamu hence more enhanced operations. However, it has nothing to do with Lamu port, it’s the insecurity we know that has been ongoing and therefore it’s farfetched to imagine that it would affect the operations at Lamu Port,” Said Kibicho.

At the port of Mombasa, Kibicho also witnessed the docking of a Big Lift Vessel that arrived at the Port carrying modern equipment acquired by KPA to complement operations at the Lamu Port.

The newly built port, which will mainly deal in transhipment, comes at a time when nearly all the ports in the region are undergoing upgrades to meet growing demand.

The new facility is now one of the largest ports in sub-Saharan Africa and will target countries along with the Indian Ocean Islands such as Seychelles and Comoros among others.

The depth of the port, which is 17.5 metres makes it ideal for handling large ships that cannot dock at the port of Mombasa whose depth is 15 metres.

The port is a key part of the wider Lamu Port South Sudan-Ethiopia Transport Corridor, which is being implemented at a total cost of Sh2.5 trillion ($24 billion).

The PS said the government is keen to eradicate the inefficiencies within government agencies for it to realize economic development adding that KPA is making strides to achieve set timelines in the projects at the facility.

The second terminal is an important facility that is expected to raise the capacity of the port of Mombasa to allow larger container vessels to dock.

Upon completion, the port is projected to be handling an extra 450,000 TEUs per year, thereby pushing up the port’s total handling capacity to 2.1 million TEUs in the next three years.

“This port is very important and therefore the efficiency is very important, now the complaints about the turnaround time have reduced since the multi-agency team came into place, “said Kibicho.

The National Development Implementation Technical Committee’s visited the region and on its day one, Dr Kibicho was accompanied by several PSs. First, they toured Mombasa port where he inspected ongoing work at the Second Container terminal Phase two, the Kipevu Oil terminal among other projects.

Kipevu oil terminal, which is financed by Kenya Ports Authority (KPA) and constructed by China Communication Construction Company, can handle up to four vessels compared to the existing one that handles one vessel at a time.

Read More  River Yala Bodies Yet To Be Claimed -- Police

The new terminal is an off-shore facility at the Mombasa port, opposite the existing Kipevu Oil Terminal.

The project consists of one offshore island terminal with four berths whose total length is 770 meters and one work boat wharf at the Westmont area for landing facilities.

The facility also has five sub-sea pipelines, which were buried 26 metres under the seabed to allow for future dredging of the channel without interfering with the pipes.

Kibicho expressed his satisfaction that the Work at the Sh32billion Mombasa port phase II second container terminal which involved reclaiming of a sea area of about 50 acres is set to be complete this year.

“The first task is to isolate and resolve bottlenecks impeding the implementation of National Government projects in Mombasa, Kwale and Kilifi counties. This will ensure the government achieves its development agenda within its timelines,” said Kibicho.