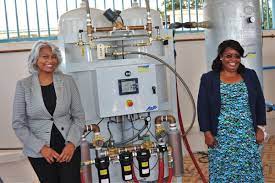 Kitui is preparing to reform its health care services and considerably lower its health budget after the county government purchased a Sh23 million machine to produce its own medical oxygen for use in public hospitals.

According to Moses Mutua, the medical superintendent at Kitui County Referral Hospital where the plant is based, the oxygen generator is able to produce 300 litres of the essential commodity per minute.

“The oxygen generator is able to serve 100 patients simultaneously. This is more oxygen than the referral hospital needs at any one point,” said Dr Mutua.

The oxygen generator is funded by Climate Fund Managers, a Dutch based fund, through Epicentre Africa Engineering, an engineering company which mainly deals in water treatment solutions.

The generator, which started operating yesterday, is expected to turn around the county’s healthcare system which was badly ravaged by the Covid-19 pandemic.

At the height of the Covid-19 pandemic, the bill on oxygen rose to Sh3 million, according to Winnie Kitetu, the Health executive. Yet the county reported many deaths related to lack of medical oxygen as its healthcare system strained.

“Sometimes we were forced to borrow oxygen from the neighbouring Machakos and Tharaka Nithi counties due to the high cases of Covid-19 we handled. We reached out to donors. The problem has now become a thing of the past with the installation of the oxygen generating plant,” said Dr Kitetu on Tuesday during the commissioning of the oxygen generator.

New Partnership To Cut Down Cost Of TB Drugs