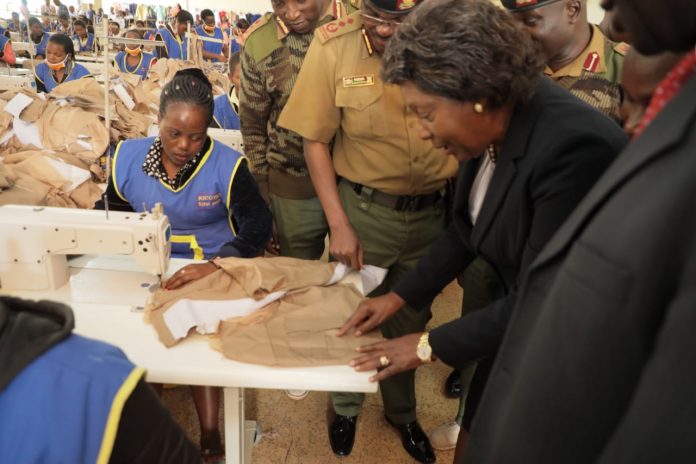 BY HENRY MARETE – It was a proud moment for Kitui County, Thursday, as the first batch of uniforms for chiefs and their assistants, manufactured at its nascent Kitui County Textile Centre (Kicotec), was delivered to the Ministry of Interior and Coordination of National Government.

Kitui Governor Charity Ngilu, made the announcement through her twitter handle @mamangilu.

“Today, we make delivery of the first batch of uniforms for chiefs and their assistants to the national Government. Kitui County continues to grow in leaps and bounds as we manufacture locally, create more jobs for our youth, and increase revenue for development programs.”

The hashtag #MadeInKitui, immediately began trending on the microblogging and social networking site with many Kenyans congratulating Ngilu and Kitui County, on the achievement.

“If all the 11,401 chiefs and their assistants in the country are given two sets of uniforms at a cost of about Ksh.10,000 each, Kitui County is expected to earn Ksh.228 million from the deal this year”. #MadeInKitui

President Uhuru Kenyatta had directed that Kicotec be awarded the contract to manufacture uniforms for the local administrators on April 2nd as he presided over the launch of a Huduma Number registration drive in Masii, Machakos County.

Last month, Governor Ngilu and team presented sample material for the uniforms and other garments made at the factory to Interior Ministry officials and upon securing the necessary approvals, the stage was set for the mass production of the uniforms to begin.

The factory, modelled along the export processing zones concept, operates round the clock and presently employs about 600 tailors. More jobs and income generating opportunities are expected to be created along the value addition chain, including for thousands of cotton farmers.

The deal is part of the implementation stage of the Government’s Big 4 agenda, supporting the manufacturing pillar. The country has 3,256 chiefs and 8,500 assistant chiefs.