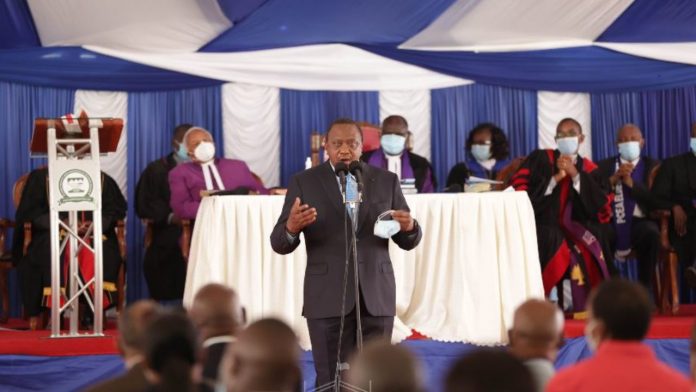 President Uhuru Kenyatta has called on the church to work more closely with the Government in the delivery of services to Kenyans.

The President noted the state and the church need to synergise each other saying, it is prudent for leaders whether secular or religious to cooperate so as to achieve the common objective of serving humanity.

“You can always count on my support, my Government’s support as we move together State and Church to do God’s will. Both of us are here to serve and we need each other and we need to work together. By doing so we are able to achieve our objectives much more quickly and deliver the needs of our people,” the President said.

The Head of State spoke Saturday at Christ Is The Answer Ministries (CITAM) in Karen, Nairobi County during the consecration service of Rev Calisto Odede as the new presiding bishop of the church.

Rev Odede becomes the third presiding bishop of CITAM and is succeeding Bishop David Oginde who is retiring after ten years at the helm of the church.

President Kenyatta congratulated Rev Oginde for his decade of service and thanked him for serving both the church and the country with distinction, and assured the retiring clergy of his continued friendship and support.

To the new head of CITAM, President Kenyatta wished him success as he takes up the mantle of leadership and encouraged him to lead with courage.

“I wish you every success as you embark on the challenge ahead of you. We hear a lot of people talk about big shoes and the impossibilities of filling the big shoes. I believe as the famous poem says, do not compare yourself with others because by so doing, all you become is vain and full of despair.

“There’s no need to compare yourself with others. God has given you, your shoes and he has made you for a time as this. Stand up and work, tomorrow there will be others,” the President advised Bishop Odede.

In his acceptance speech, Bishop Calisto Odede assured the President of his support and prayers saying despite the current global health challenges, God will still revive the nation and all sectors of the economy.

On his part, Bishop Oginde thanked the President and the Government for the support accorded to him during his tenure at the helm of CITAM saying it was an honour and privilege to serve his church and the country.

“Your Excellency President Uhuru Kenyatta and your Deputy President William Ruto you have been great leaders of this country and thank you. I have been amazed by the privilege and honour you have accorded me during my leadership in CITAM,” Bishop Emeritus Oginde said.

The consecration sermon was delivered by South African evangelist Frank Chikane who challenged the church to take a leading role in helping the world to recover from the ravages of Covid-19.