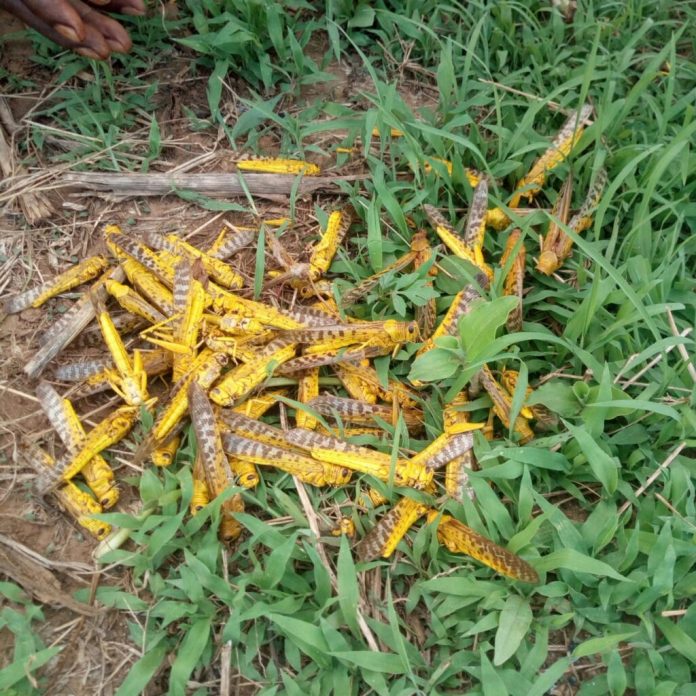 “Don’t eat deserts locust, as they may be poisonous.” Governor Kingi tells residents as the pets invade the region.

Kilifi Governor Amason Kingi has asked the residents not to consume the desert locusts currently ravaging the region, saying that the pests’ normal used as a local delicacy by the locals might possess some traces of pesticides that is harmful to their health.

In a statement released on Friday, Governor Kingi also urged residents not to chase the locusts because that will make them even spread further and extend the destruction of crops.

Kilifi county is at the moment struggling with the invasion of the deserts locust believed to have migrated from the neighoburing Somalia.

“We’ve regrettably noted the invasion of parts of our County by desert locusts. Between Wednesday, when the locusts were first seen in Magarini and today, the locusts have rapidly spread to Ganze, Kilifi South, Malindi, Rabai Sub-Counties, though without much damage to crops so far,” the Governor said in the statement.

The governor said plans for ground and aerial spraying are in top gear and that all concerned government agencies will embark on the process.

“Immediately we received these reports, a team of County Officers embarked on surveillance and started to engage the Ministry of Agriculture and Food and Agriculture Organization (FAO), to heighten response measures and launch preparations for ground and aerial spraying which will commence once arrangements are concluded,” said Kingi

By Saturday morning, all sub counties had reported cases of the invasion of the desert locusts and according to agriculture experts, the locusts are old and less destructive.

“They are currently breeding and in one and a half months they will be very destructive and that calls for an immediate action before things get out of hand,” said an expert.

Kilifi County government dispatched five teams to all the 35 wards for surveillance and to identify the type of locusts being witnessed and the numbers of locusts were massive.

By Friday evening the locusts had been witnessed in almost all the seven sub counties.

County chief officer in charge of Agriculture and Livestock Fredrick Kaingu who was in one of the surveillance teams said the kind of locusts that have invaded the county is called Schistocerca gregaria locusts, a highly migrating specie of locusts.

“Historically these locusts migrated from Yemen, came through Ethiopia and Somalia, On the coast, we did not have any kind of invasion in early February or March but it is now that we are seeing another wave whereby we are having invasion in the coastal counties,” he said.